Today we bring you an epic struggle between the Albainn 'Painted Ones' and the
Khthones 'Slaughterers'.

TheKhthones deploy first due to their lower authorithy rating. The Krokodarchon chooses to deploy his reptilian mates in a central position on the battlefield. Two small woods flank the Khthones' deployment, so it won't be easy to outflank the small host.

The Albainn general decides on a left flank deployment type. Oghuritnes and oghurs are on both flanks and the revered goghu anchors the battleline. 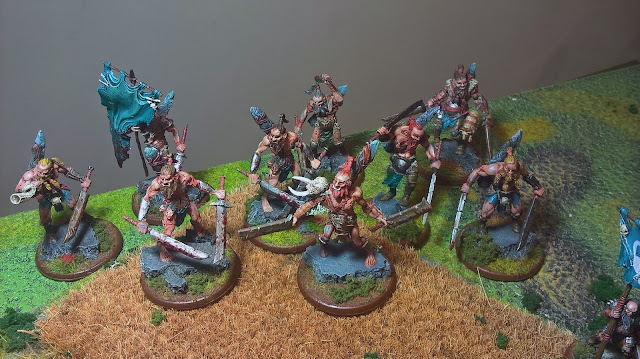 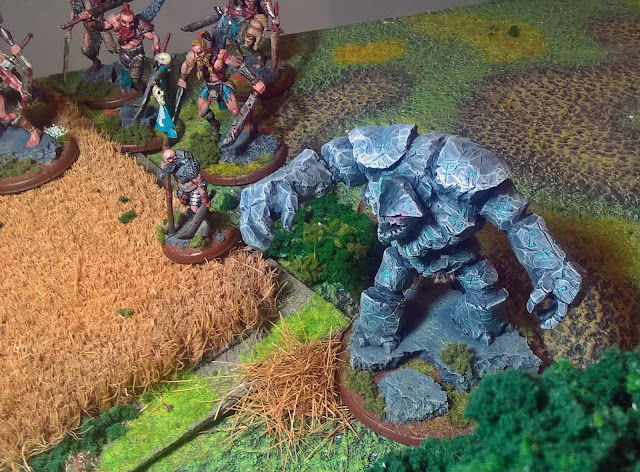 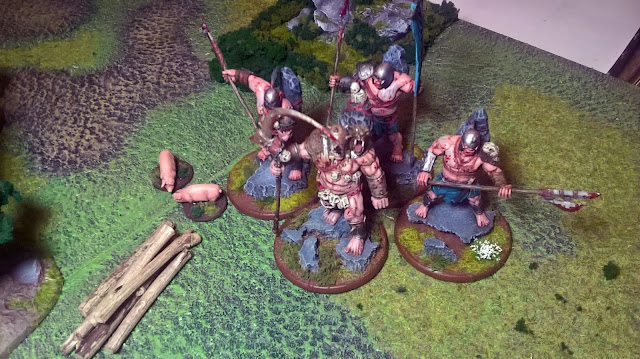 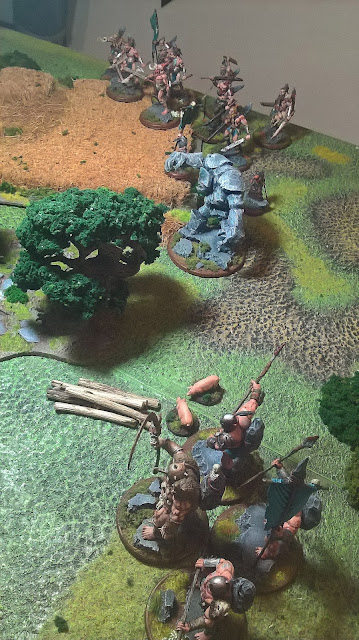 Both hosts are deployed, time to smash each other's brains out! 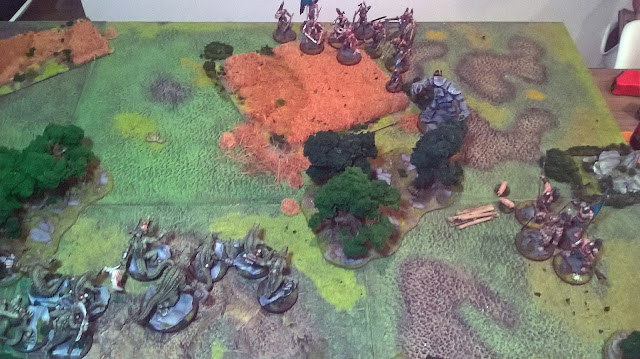 The Krokodarchon starts the battle by daunting the Oghuritnes and Drast, the hound of Dun Durn. He then advances alongside his Krokodar bodyguards.

The Albainn sagart casts 'resistance' on the big unit of Oghuritnes. He then tries to recover but fails his recovery test. One fumble roll later, 9 wounds of damage are added to one of the Oghuritnes. Luckely, the Sagart survives the magic backlash. Bagseg, the Oghuritne Umaer inspires the Oghuritnes and they move towards the Krokodar. 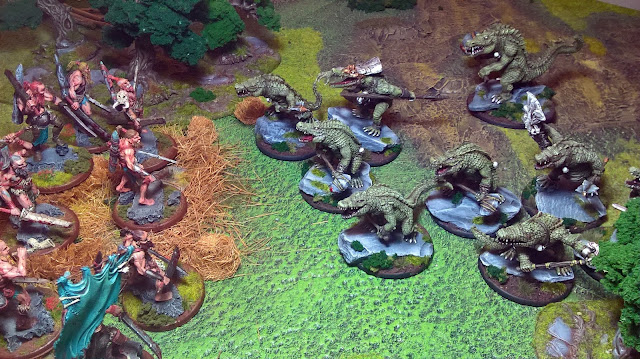 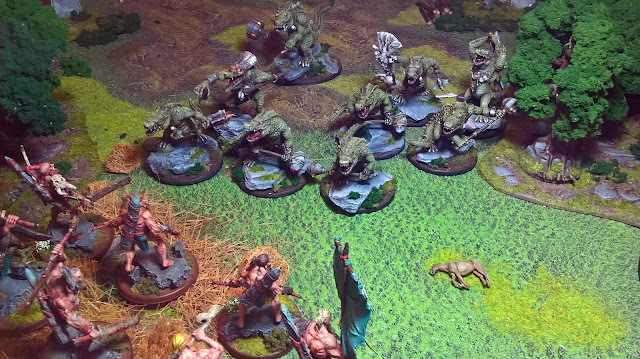 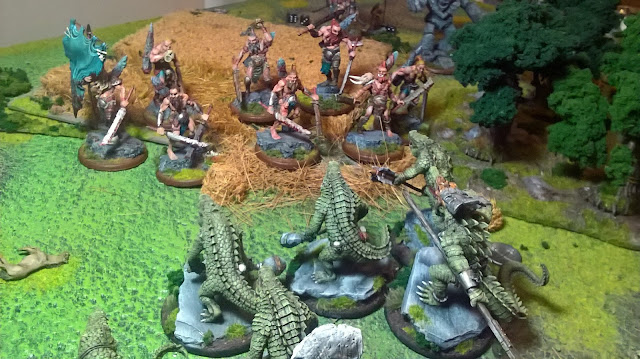 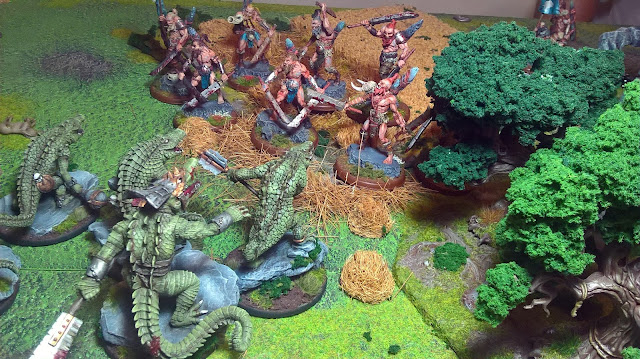 Aggrakk, the brutal Krokokh warrior charges into the Oghurs. One Oghur is knocked uncouncious and is killed outright. But before the Krokokh can feast on the corps of the fallen Oghur, Gudhlagg and the surviving Oghurs step forward and kill the foul beast. 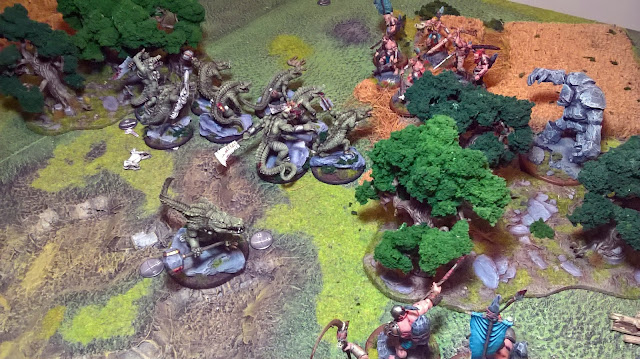 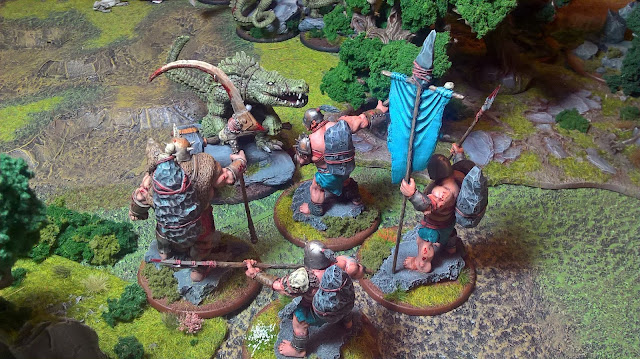 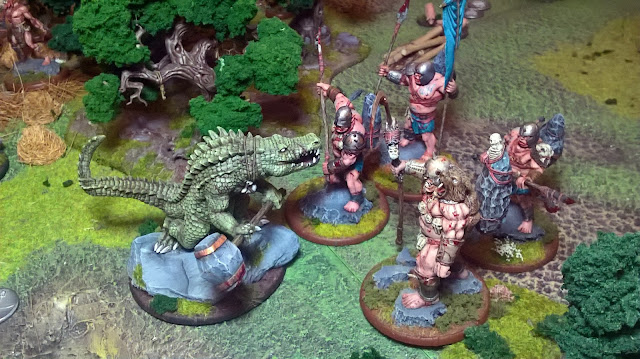 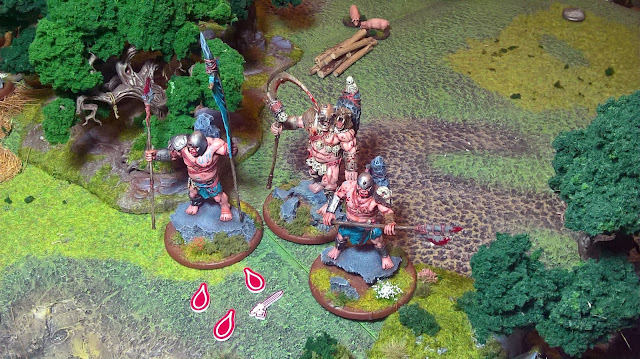 Brugbad, the Oghuritne Rud rallies the survivors around him and together they put 41 damage on the Krokodars.

The Krokodars are the strong unit, are swift chargers and aquired a whole pile of blood. Unsurprisingly, the Oghuritnes retreat from the onslaught but are caught and utterly destroyed by the Krokodar and their leader. Savage! 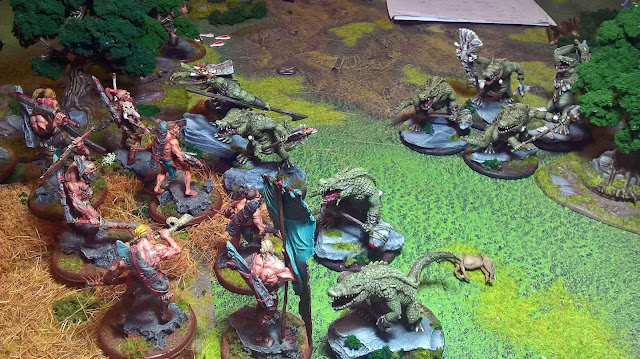 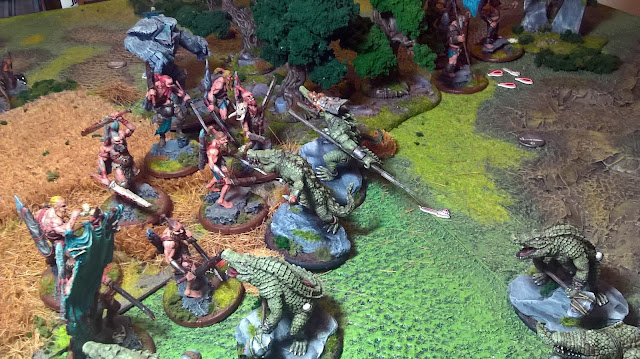 The Albainn are reeling but continue the fight. The Sagart puts 'stone shatter' on Bagseg, the Oghuritne Umaer. Bagseg then charges the weary krokodar unit and deals 53 damage, enough to kill a Krokodar warrior all by himself. The other Krokodar unit and Ettu, the revered Oghu exchange blows but both hold firm. 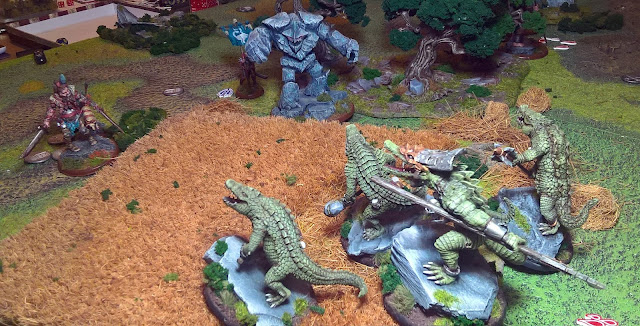 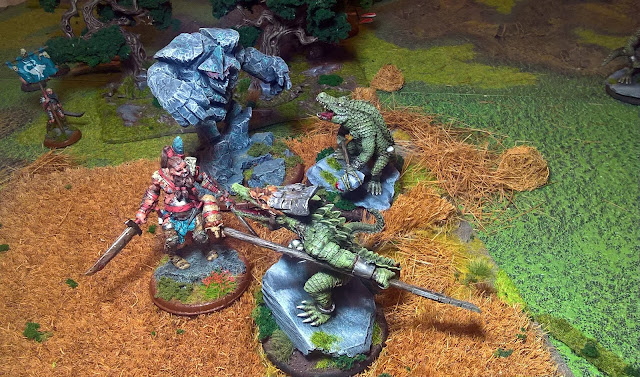 Once again, the Khthones gain the initiative, despite the re-roll for the Albainn. The krokodarchon activates first and cuts down Bagseg. His surviving bodyguard kills the wounded Oghu. 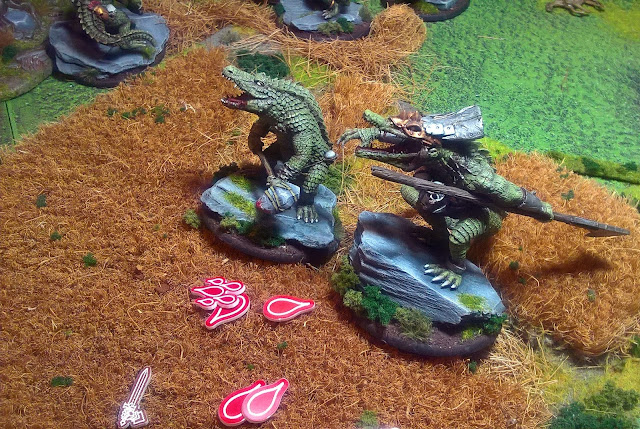 The Albainn Oghurs finally end their flanking manoeuvre and attack the second Krokodar unit. They deal 93 damage but despite the carnage, the stubborn Krokodar hold firm. The Krokodarch, the other Khthones commander, then joins the fray and destroyes one Oghur. Gudhlagg and the surviving Oghur fall back. 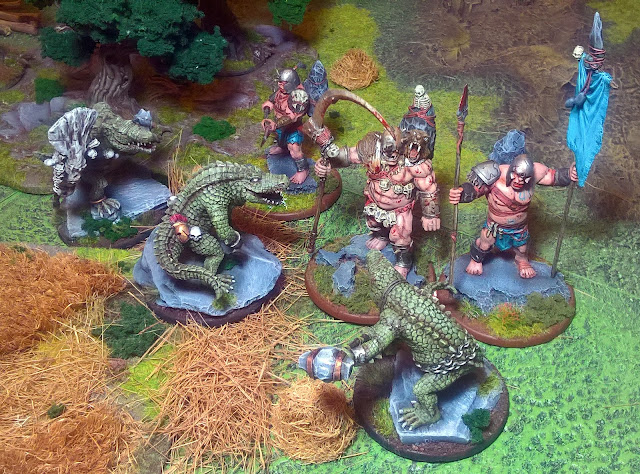 The end is in sight for the few Albainn survivors. Gudhlagg and his mate make a last stand against the murderous reptiles. After a last brutal combat, the game ends. 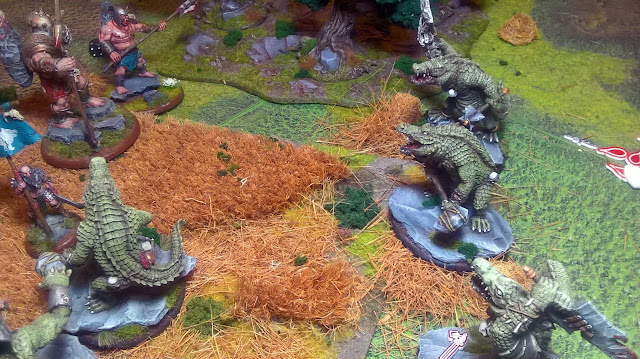 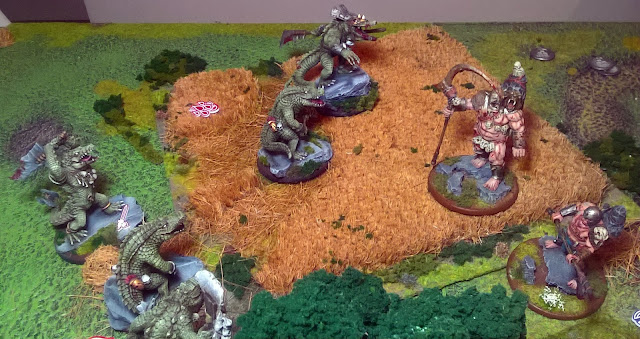 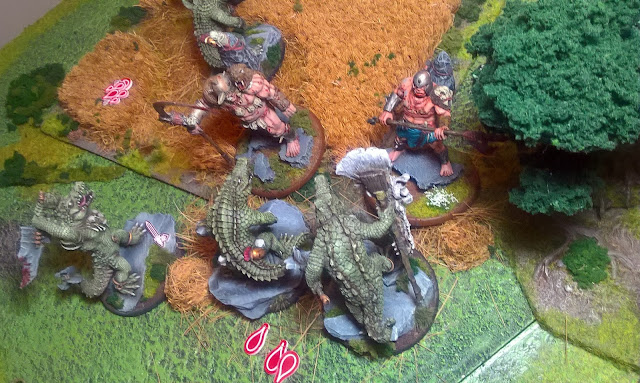 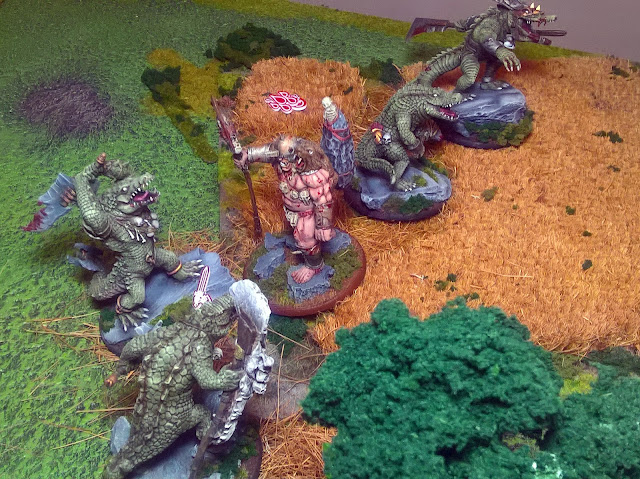 Those Kroks are as brutal as advertised. What did you think of the Goghu (the stone golem I think)? Was his offensive output useful, or is he primarily a tank? Thank you for submitting the write up with all those photos, it's really cool to follow along. Especially since your minis are all painted!
Top

Byzantii V wrote:Those Kroks are as brutal as advertised. What did you think of the Goghu (the stone golem I think)? Was his offensive output useful, or is he primarily a tank? Thank you for submitting the write up with all those photos, it's really cool to follow along. Especially since your minis are all painted!

Thanks for your reply Byzantii!

Those Kroks are truly brutal, especially the Krokodarchon (he's a beast!). I like playing them because of their no nonsense playstyle. They come at you, beat your brains out and hardly ever break because of the stubborness. They only lack numbers and a decent authority. Their deployment is really important because they only have pace 5. But I managed to deploy between two dense woods so Thomas couldn't swamp me with both his Oghur and Oghuritnes at the same time. And who needs a high authority when you allways roll low on initiative tests

We find that the Goghu is a good tank against 60mm models. His offensive output is not as great but he makes a great anvil. I fear him more when I face him with my Fomoraic. He allways grabs my Tarvaxes and squeezes them to death! And my Norse invocations loose a lot of effectiveness when the big rock is around, he is able to absorb alot of magic.
Top

Hey Beire, thanks for the response. I love hearing that his value differs by opposing kindred.

Please keep the battle reports coming, you do a great job with them.
Top

Brilliant stuff Beire! Love it. These battle reports are superb and your armies are superbly painted! Great work guys.

The Krokodar are indeed brutal... except against a Bog Beast!

The Krokodar are indeed brutal... except against a Bog Beast!

Next time I bring some bog beasts