Hey I am just new to Darklands, I just bought the Kickstarter for the Tarvax and the Ysians and can't wait to get them. In the mean time is there any way that someone that has them can do a size comparison to warhammer figures? Such as other minotaurs, space marines, orcs or whatever really so that I can get an idea of the size of them? That would be really helpful. I can't wait to start painting them and putting up some pictures. Thanks again.

Kaastaruk, banner bearer from the Tarvax starter next to a space marine from Dark Vengeance. Hope this helps.

Thanks for the picture that does help quite a bit. If anyone else can post more shots of others as well that would also be appreciated.
Top

Did you order ysian drunes or brutes? I can do another couple of pics today with trolls, dyndraig, ysian drunes and a couple of bigger beasties. Only have space marines for scale though, or some Hordes and Malifaux pieces.
As I always say. At the end of the day.................it goes dark

Showing off again Andy? Still have not got my Hrudinn

Really?! Thought all the Norse had been sent now and they were starting angelcyn next week
As I always say. At the end of the day.................it goes dark

Long story, well, not that long

Wow! Those trolls are massive! I automatically assumed they would be the same size as the Tarvax.
@AndyP, are you the same guy that used to post WoC/De battle reports on warhammer.org? I always read those before I dropped out of the hobby in 2010.
Top

No sorry. That's not me. I haven't played any miniature game on a regular basis since the mid nineties. Just dabble in a few these days, mainly board and card games, and collect/paint any models I like the look of. The background and theme of this one however has really sucked me in and I am going to try and get my mates playing it.
As I always say. At the end of the day.................it goes dark

Thanks a ton Andy, that makes it a bunch clearer on quite a few sizes. I hope that this game makes it a lot bigger and I see this played at my local game store.
Top

wrinklestiltskin wrote:Wow! Those trolls are massive! I automatically assumed they would be the same size as the Tarvax.
@AndyP, are you the same guy that used to post WoC/De battle reports on warhammer.org? I always read those before I dropped out of the hobby in 2010.

That's Andy Potter - he's still gaming on the UK WFB scene, in fact he's coming to the WFB event I run this Oct (and every Oct) The Maul.


I will of course do some Darklands malarkey once the rules are in people's hands.

Size references are always nice to see, and yes the trolls are big lads!
Top

Sorry to thread necromancy this post, but I did this experiment last night and thought I'd share it. From my blog, in case people want to check it out there.
"How big is that?" It's the second most common question I get about Darklands. Well, it depends on the model! I've been asked it so many times, though, that I figured I'd just cut to the chase and take a bunch of photos of Darklands models standing next to other models.

First off, let's introduce you to the panel! These are a series of models from different manufacturers, intended to give a sense of scale and proportion for how Mierce stacks up against the other companies. I apologize for half the paint jobs; some of them were painted ten years ago before I knew what I was doing, and one fell between two couch cushions after being base coated and was just found by my daughter.
They are, from left to right, a Mantic Zombie, a Games Workshop Flagellent, a Rackham Griffin Conscript, a Reaper Bones dude, a Games Workshop Generic Science Fiction Soldier, a Reaper Dark Heaven Legends piece, a Games Workshop Savage Orc, a Rackham Wolfen, and a Games Workshop greater daemon.

So, now that we have our Usual Suspects, let's see where Mierce fits in! We'll start with the small one of the lot, Geriant Nerthol of the Brythoniaid. As you can see, he's very close in proportion and height to the Rackham Conscript, and thinner but a hair taller than the GW Flagellent.

"Can we go bigger?" Sure. Here's an ax-drune. He's still close to the scale of the Rackham model, and makes the Science Fiction Soldier seem very squat and blocky.

"Can we go bigger?" Of course we can! Here the An-Ax-Drune, the meanest and tallest of the Ax Drunes. The DHL piece seems over exaggerated in its proportions next to it - if anyone asks what Heroic means in scale, you can show them these two models.

Here's Beowa in his human form. You can see that his size is pretty close to the An-Ax-Drune. Unfortunately I haven't had a chance to build his better half, or I'd add it to this list.

"Can we go bigger?" Of course we can! Here's the Norse Steersman, who Mierce have said is intended to be between 6'6 and 7' tall. He's taller than the DHL model, though slimmer. He also lacks the bulk of the savage orc.

"Can we go bigger?" Sure we can. Here's Kraan on foot. His armor bulks him up some, but his head continues the Mierce proportions.

"Can we go bigger?" I'll bet we can! Here's Carrowek, who is just freakishly large. The Science Fiction Soldier doesn't even brush his nipples, and his eye line is only a hair down from the Rackham Wolfen.

So, to summarize, here are the Mierce infantry in ascending order. There's a Science Fiction Soldier for scale on the end.

"Can we go bigger?" Moovelous! Here's a Tarvax. He's taller and bulkier than the wirier Wolfen, and comes up to the daemon's shoulders.

Here are all the Tarvax, with the Wolfen and GW-IP models for reference.

"Can we go bigger?" We have a ways to go, yet! Here's a Norse troll. He's taller than the Tarvax were, and nudges into the daemon's armpit. 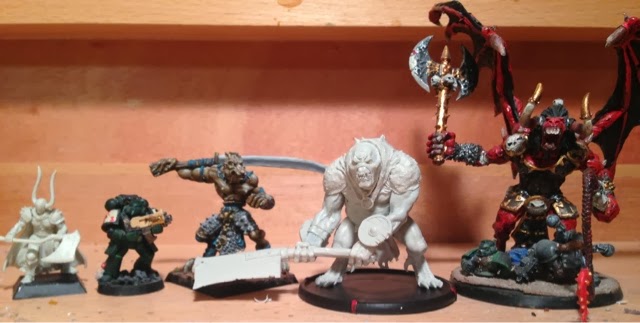 Here are all the Trolls next to the same three models.

"Can we go bigger?" Absolutely! Here's a Dyndraig. His eyes come to the daemon's jawline, just a hair shorter. His horns are taller, though. 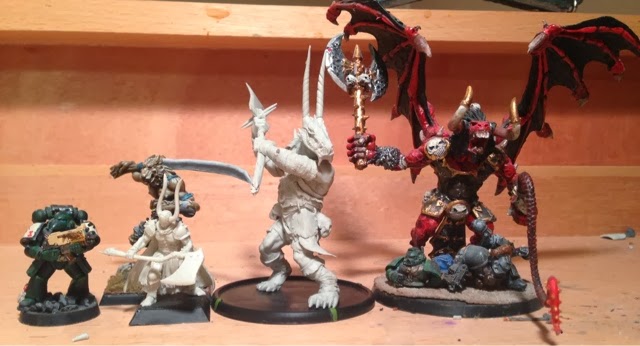 Here are the Dyndraig I have built, with the three control models for scale.

"Can we go bigger?" I don't buy Mierce miniatures to be small! Here are the two Sronax I've built. Wonder why they're so expensive? It's because they're eye-to-eye with that daemon! 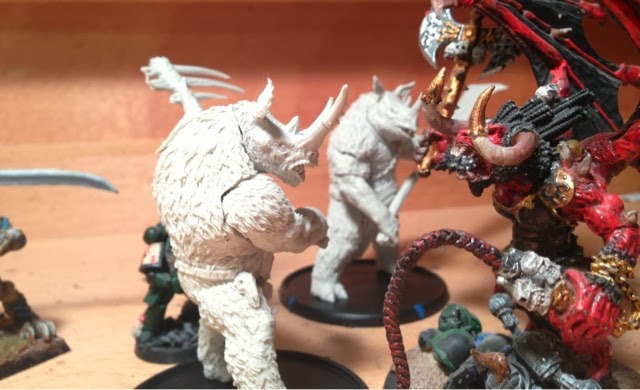 "Can we go bigger?" Sure, but I've run out of monstrous infantry. It's OK, though, because that greater daemon is considered a monster! Monsters require monsters, so here's Ungefelic.

"Can we go bigger?" Sure! Here's everyone's creepiest quadruped: Torku. She's as tall as that daemon.

"That's great, Ryan, but can we go bigger?" Let's do it! Here's Glaun. He could put the daemon's head in his mouth without having to bend down much.

"That's great and all, but can we go bigger?" I'm not done yet! Here's Aradae Mawr. He's on a rock, but he towers over everyone. 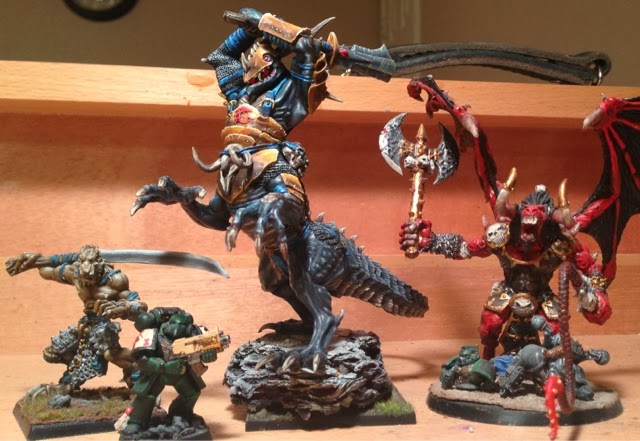 "That's pretty big all right. But... Can we go bigger?" It's going to take some rage but sure we can! Here's Galagaak, the raging Tarvox. 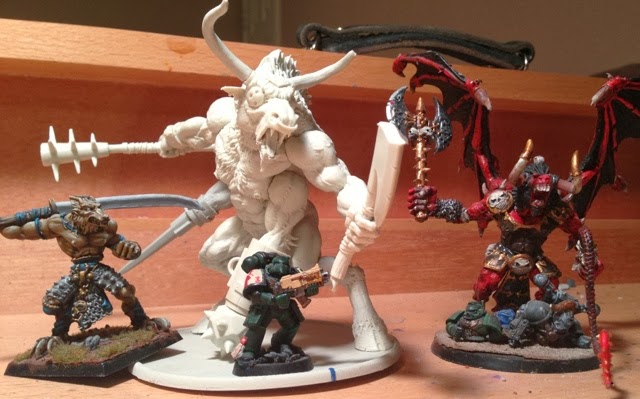 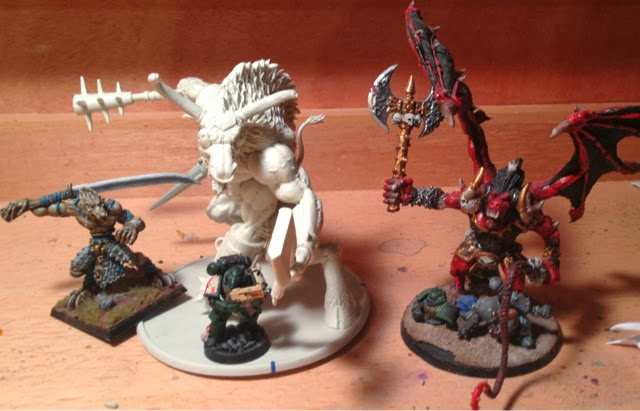 "Wow, that's big. But... can we go bigger?" What kind of question is that? Of course we can!! Here's Shaaroc, reviled Drackox! He's just massive. 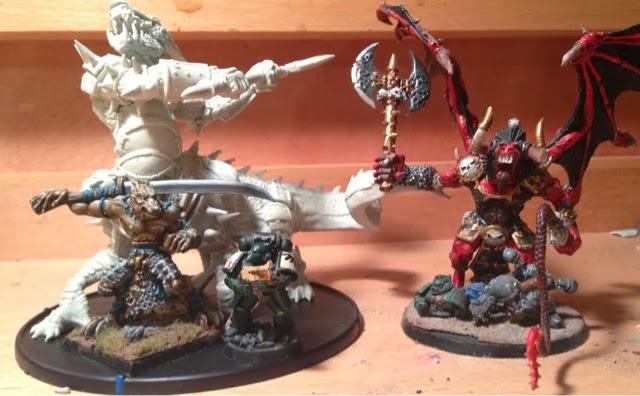 How massive? The big daemon can only see his gut plate. 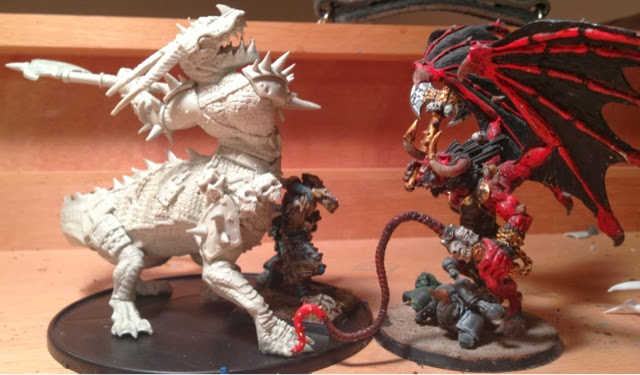 "Ryan, that's gigantic! It's amazing! Can we go bigger?" As it happens, we can. Here's Mjagnir, who is so large that I can't even keep his head under the paint desk's top. 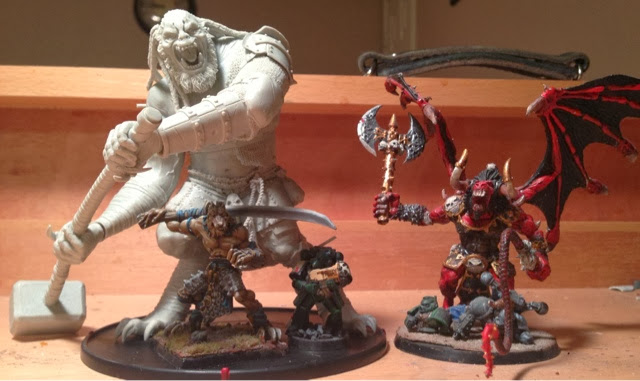 I've come up to Mjagnir's eye level. Notice the daemon's wings aren't even this big. 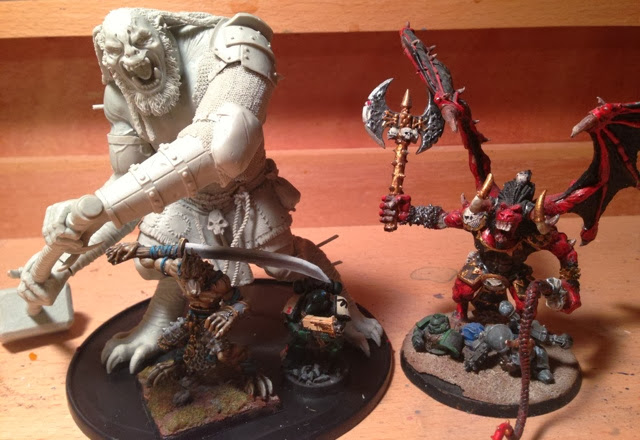 Here's the Jotunn and the daemon eye to, er, thigh. 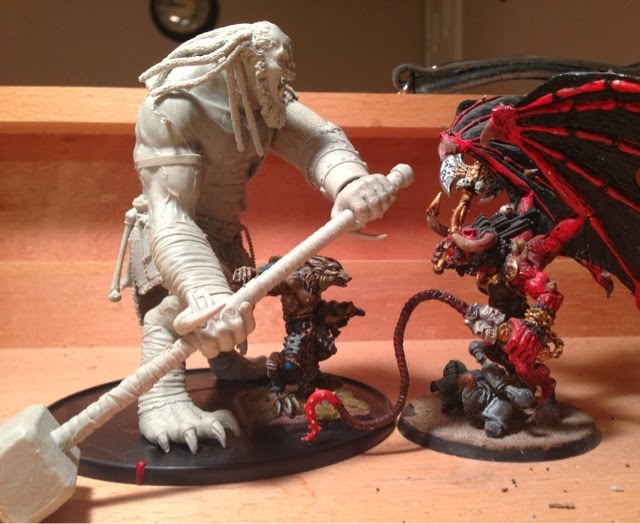 "Ryan, that model is gigantic. You know what I'm going to ask next though, right?"
Of course I do. You want to see Krull. You want to see him next to that greater daemon. Prepare to be satisfied! 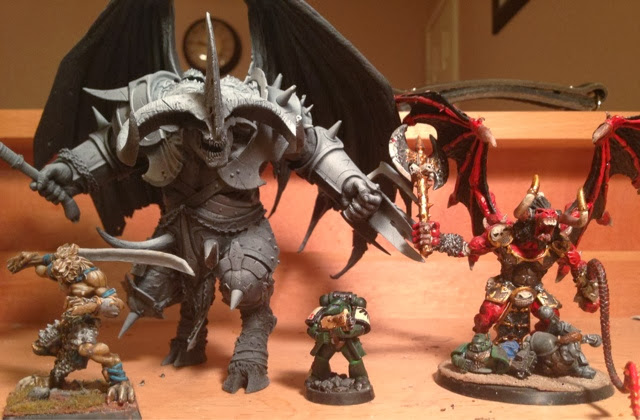 Or not. That daemon is, honestly, puny next to Krull. There's no comparison between the two. Krull could eat those all day long. 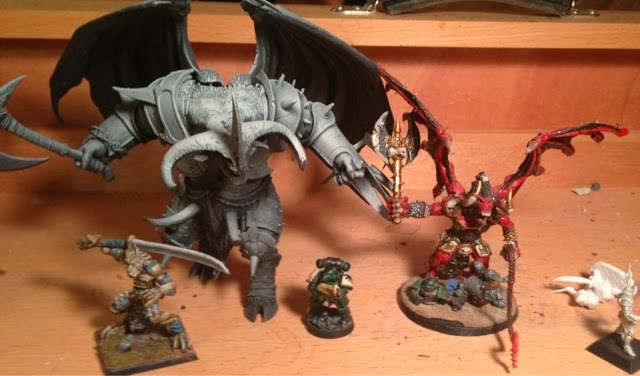 Eye to eye? That daemon needs to fly almost his entire height to get to Krull's eye level. 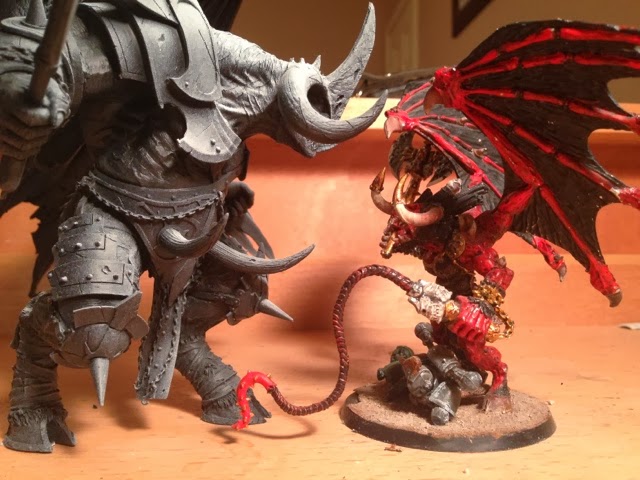 "Ryan, Krull is huge. But can we go bigger? How can you make him seem small?" Mjagnir comes pretty close! In fact, his eye level is above Krull's. However, Krull is hunched under the weight of his wings and armor, and weighs almost twice as much as Mjagnir. 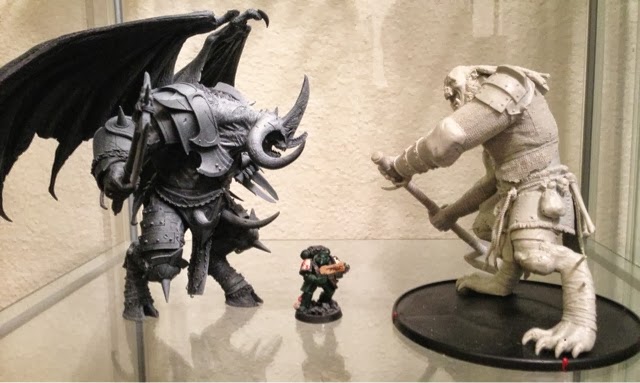 With that said, yes. I can make Krull small. I only have one model big enough to do it, but he does it easily. Content yourself with the fact that not many people will be able to pull out a Titan Dragon of Aarklash to play the "Mine is bigger!" game. 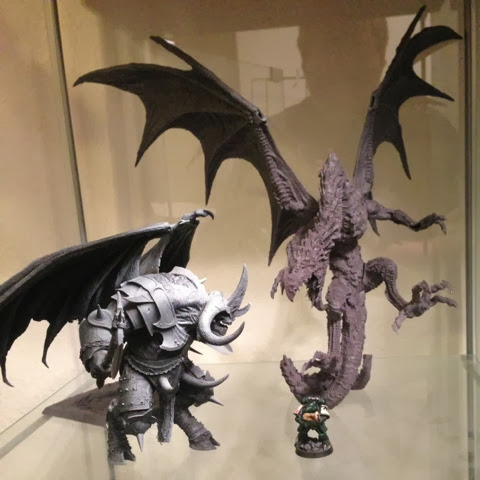 "Can we go bigger?" Of course we can - but you have to pledge on the Darklands Kickstarter so that we can get more models!
--Ryan Smith
Blog: http://thebeerwaaagh.blogspot.com/
Twitter: @beerwaaagh
Top

This is awesome. Thanks for posting. It is really nice to see the size differences!
Top
Post Reply
14 posts • Page 1 of 1