The basic idea is you pledge to paint something for Darklands over the course of the month, posting progress and updates (and plenty of photos) and generally encouraging each other along. Keep challenge related posts to this thread. This is not meant to be serious. Baalor isn't going to turn up if you fail to complete a pledge. See this as a more casual motivation exercise.

As for the challenge itself, you will earn points for yourself and your Kindred which will allow you plenty of bragging rights. If these become a regular thing, I'll set up a hall of fame. The points awarded are:

Feel free to include Darklands specific terrain and model construction as part of the challenge. I'll work out points later.

Death to the grey hordes! Bring forth the painty goodness! Let's see those pledges!
Last edited by zedmeister on Fri Feb 19, 2016 12:09 am, edited 1 time in total.
Top

So, to kick us off, I Zedmeister pledge here 8 Duguth.

Why Duguth even though I don't collect Anglecynn? 1, they're gorgeous models. 2, they'll make excellent proxies for other units!

Here's where they are at the moment: 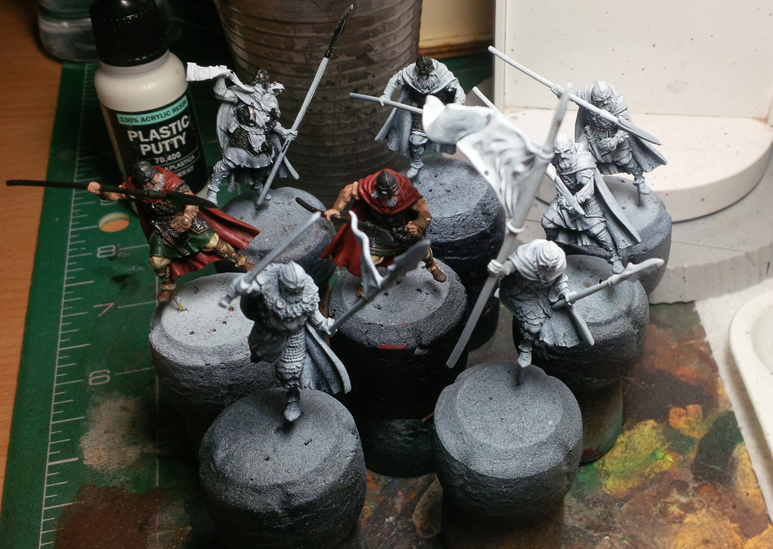 I've got till the end of March to get them like the two I have already painted.
Top

I can't promise they'll all be on Darklands bases, but they'll be painted!
(Edit: now with pic!)

I, Alex, pledge during March to assemble and texturise/scenic up the bases of:-

If they get primed that's a bonus!

I aim to get these 3 Hrafnmenn done by the end of March! 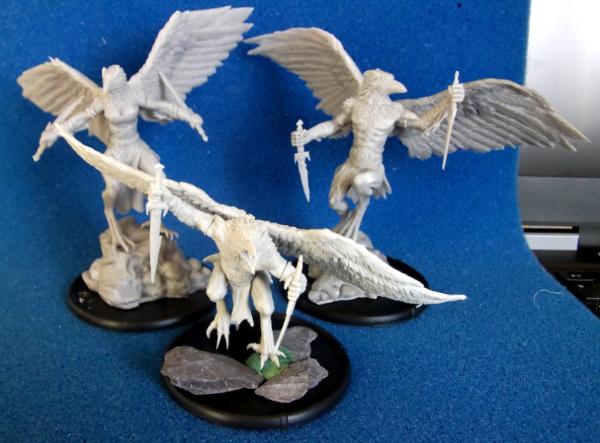 Ryan, I am very disappointed. Not a single drop of alcohol in sight!

A quick sip of that wood glue may have the same effect?

zedmeister wrote:Ryan, I am very disappointed. Not a single drop of alcohol in sight!

It was on my Untappd checkin for that night, but it cropped out some of the models. Fear not, my alcoholism is undimmed!

Alright, here's my group for March 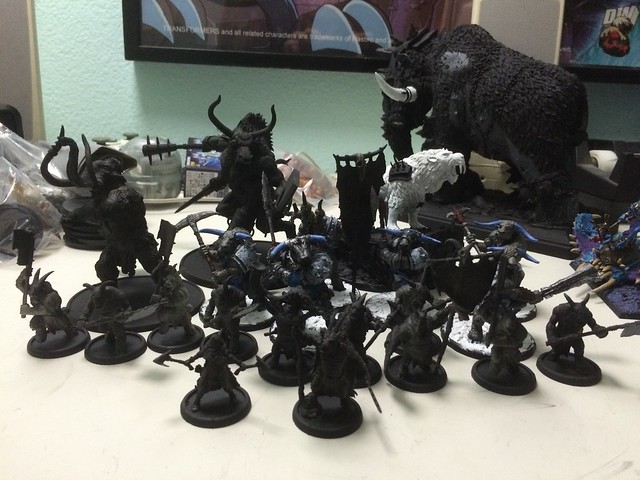 Here is my Brugg - not even touched by paint:

That base looks cool already

Thanks. It's just corky base with static grass (green one). Higher grass is made of short pieces of linen string attached with white glue.
My painting blog:
http://chestofcolors.com/blogs/jerzyks-corner/
Top

Go on then Ill join in.

I pledge to paint:

So, just over a week has gone by and we're about to Officially start March. So, time for a quick round up. Here's the total amount of points that have been pledged by us so far:


Razormage has plunged right into the deep end with a total of 138 points pledged! Fomoraic are definitely the winners in terms of models pledged for - Baalor will be pleased.

As for myself, here's the status of my Duguth as of last night: 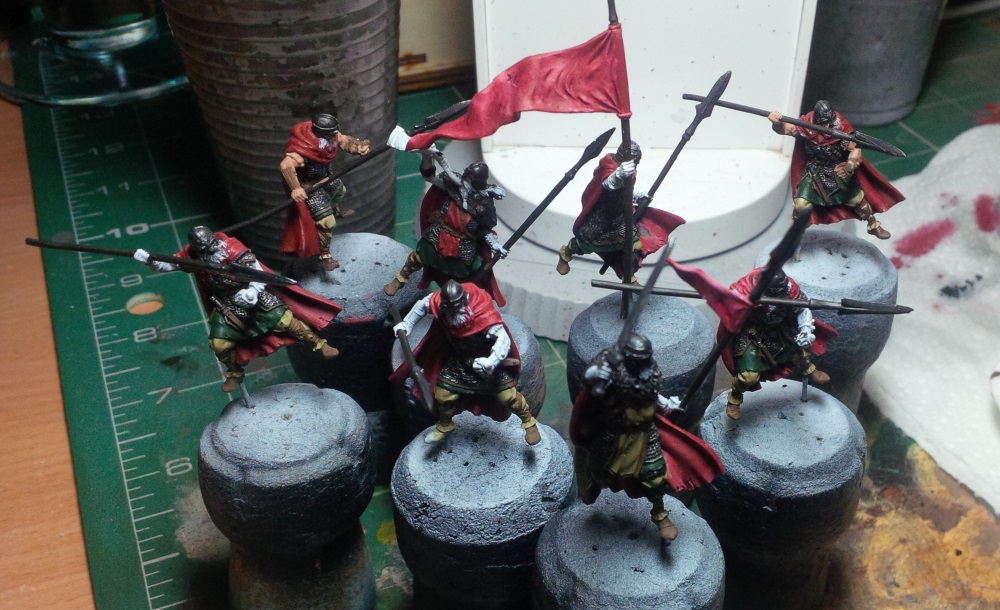 They're in that messy base coat stage. Mistakes everywhere, but I'm making slow progress. Primary reason for my slowness is that my current go-to brush finally keeled over, frayed. So, after a quick ebay order, I've got a fresh Winsor and Newton No. 2 brush to carry on. Managed to assemble a load of Erainn in the meantime though.
Top

Alright, I've got all the Tarvax finished.

So I believe that's 19 points for the Fomoraic.

C'mon folks, don't let Baalor get too far ahead! I want to see some other kindreds start to stand against us! (Really I just want to see a bunch of cool painted minis).

I'm off and running on the Gabrax unit with their Shaman warchief as well.
Top

I've made progress on the Duguth since last week and am beyond half way to completion.
Top

Not too much progress here yet, but I do have all 3 Hrafnmenn gap-filled, washed and primed, and have started on the fleshy parts

Nice Idea - a challenge might be just the right motivation to get things going, thank you Zed for opening it up!

Well, I think I will try my hand at it.

It might be a little surprise for those who have read my Kickstarter Comments, but no - it is no Byzantii, not even an Infernii Miniature. It will be a Krokodar. I don´t think I will dive into Kthones, but Gologg will give me an excuse to use them, so how could I say no to such a lovely smile?

I will try to get this one finished by the end of the month, my time is very limited at the moment and I have a small conversion in mind, I don´t know if it will work out but I hope so.

Additionaly I will give the Basius System a first try to give him a nice little base. I'm in for this, but not sure what I'm going to do yet.
Still organising things with the house move and setting up my painting area. Hopefully soon as I'm running out of time!
Primarily Darklands Blog!

I have made a bit of progress on my Hrafnmenn: 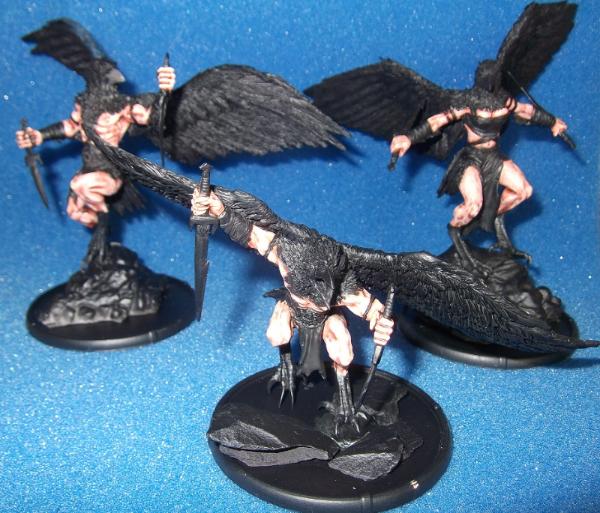 Hopefully I can get these done by the end of the month!
Top

Looking good there Slinky. Make sure that, when they're done, you show us a new updated group shot of your Heathen Men!
Top

Brugg is finally finished. A lot of steel and flesh to paint!

Did you notice that he has strange habbit of collecting ears?
My painting blog:
http://chestofcolors.com/blogs/jerzyks-corner/
Top

As for the ears, I'm reminded of that dodgy b-movie universal soldier!
Top

Thanks. We still have plenty days left in March, so I will go for another 4 points with Akhaz:

He should be faster to paint than Brugg...
My painting blog:
http://chestofcolors.com/blogs/jerzyks-corner/
Top

Well, I wish I was able to show such progress, but I wasn´t able to do very much. My plan was to use the Basius System to make some Bases, but I noticed that two years old Green Stuff doesn´t produce the best results, so I´ve ordered new Green Stuff that arrived yesterday and I went to work. I see that I´ve made a few mistakes (some fingerprints are left behind, I assumed that they would go away when I pressed it into the mould - it didn´t, next time I´ll be more cautious, also I didn´t mix the Stuff for the second base well enough - another lesson learned.) But I hope that I will be able to cover those mistakes up once I get the bases painted and some static grass added to them, we will see. I realy like the swampy structure and I think that they will work out very well, at least I hope that much.

Actually there is a fifth Krokodar, but those Bases need a lot of green stuff and what I´ve ordered wasn´t enough. No I will have to wait for the second batch and start converting a bit.
You can´t spell cOuNt crUshMOre without ONUMO!
Top

@Jerzyk - Brugg looks amazing! You've exposed details on that model that I didn't even know were there!

@Crushmore - I like the bases so far, glad you're getting a good amount of kroks going. Anxious to see a full painted unit of them.
Top

Alright, my unit of Gabrax with their Shaman warchief is finished! Next up is Naara & her giant kitty! 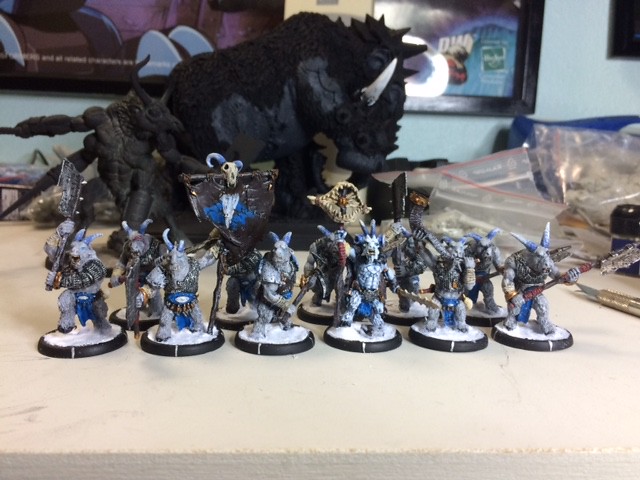 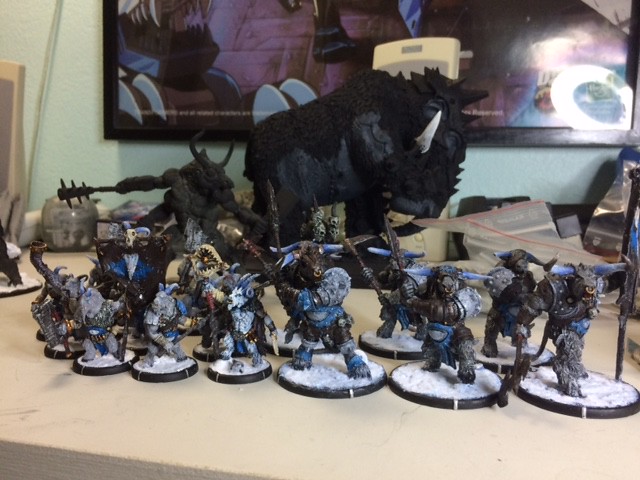 I have finished my 3 Hrafnmenn - 12 points for the Norse! 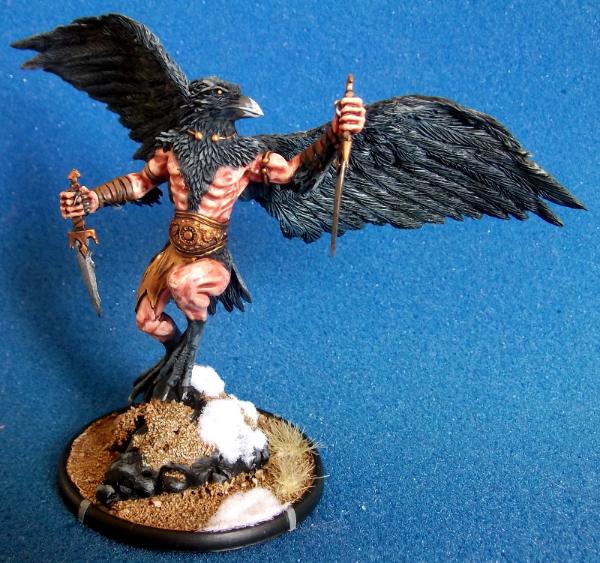 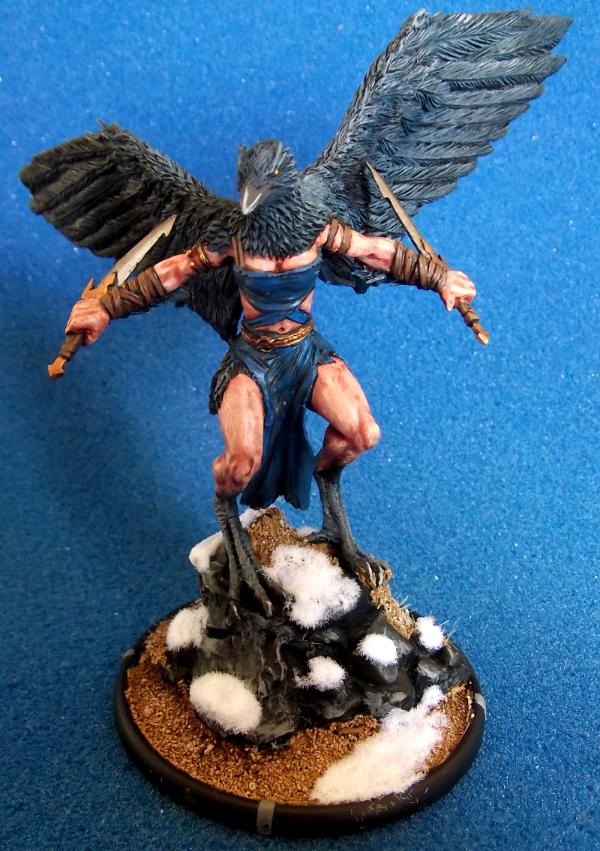 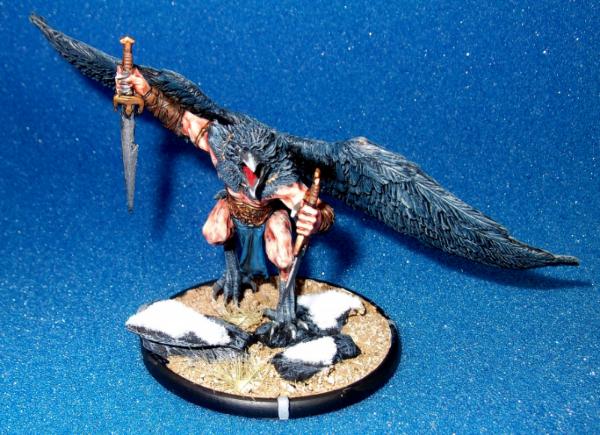 In the meantime I finished Akhaz. Two heads are better than one!

@Skull King: They look striking, great work on the Fur, I realy like the grey tone that you´ve chosen!
@Slinky: Very nice looking Ravenmen and a cute Ravenwoman! Realy nice Skintone that you´ve chosen for them and the feathers look brilliant!
@Jerzy: Impressive, simply impressive - to archieve such an Effect with a limited choice of colors - stunning, great paintjob!

Well, on my side there wasn´t all that much progress, but I think I will show where I am at the moment. I apologise for the crappy pictures, I took them with my phone. I will take proper Pictures with a camera later on. Here are the Krokodar, basecoated and slightly altered (I removed the Skull neclace and filed down most of the "Beltskulls" - taking to heart Orlandos Advice to work wet (I filed underwater to prevent the Resin Dust to go into the air and my Lungs)). I will cover up some of this areas later, as soon as my Green Stuff arives. This is the first painting stage that I´ve done, I drybrushed the scales with a brighter brown and washed them with Army Painter Strong Tone. This Picture shows how bad the Camera in my phone realy is and to some extend what my intention was - brown Krokodar. If you wonder why one of them is basecoated in white - I plan to make him an Albino, the Idea came to me when I was preparing the miniatures and removing mould lines. I noticed that his arms are very skinny compared to those of the others - but on the other hand his weapon is the most refined and sophisticated. Since they are Gladiatoral Beasts for the Byzantii, fighting for the amusement of the masses an Albino would make for a good show, would be a favourite of the crowds for its alien appearance and would be well equiped and cared of.

Well, thats it for the moment, I will be back once I´ve made some progress and better pictures.
Last edited by CountCrushmore on Sat Mar 19, 2016 4:06 pm, edited 1 time in total.
You can´t spell cOuNt crUshMOre without ONUMO!
Top

We're coming to the end of March, any more models to show off, anyone?
Top

Unfortunately, my painting efforts were scuppered by a rather nasty case of Tonsillitis! I was bed bound for 3 days and am still getting over it. I'll see what I can get done over tonight and tomorrow, but I'll doubt I'll be finished.

Ohh god, how embarrassing! Between work and my new begun studies I totally forgot about this.... shame on me

On a positive note: Great work everyone! Beautiful work allaround.

Well, I didn't finish all of the figures I pledged to do this month, but I got most of them! With the new muster rules we just got, I'm going to have to alter the list anyway, but I'm still very happy with what I got done. 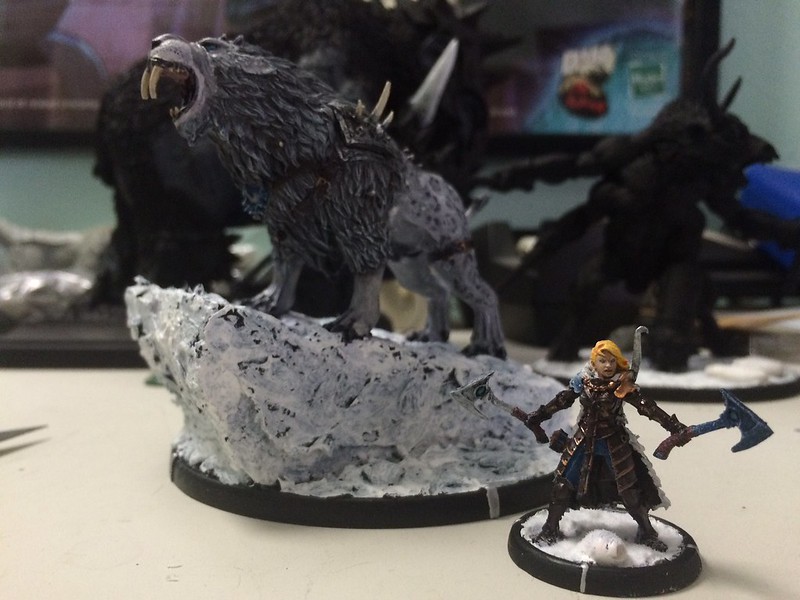 So guys, are we going to continue Darklands Hobby Challenge in April? We have to decrease unpainted minis quantity!
My painting blog:
http://chestofcolors.com/blogs/jerzyks-corner/
Top

Well, that was a bit of a strange month (for me) and I, unfortunately, didn't meet my pledge. For shame!

However, we had some cracking completions:

First out was Skull king with his Tarvax unit which was finished within the early days of March. Followed by a complete unit of Gabrax and finishing off with the Nasty Naara and the Feleox! 39 well earned points

Next, was Slinky who flew in on some unpainted crows and left with a nice unit of 3 Hrafnmenn. 12 points for the flying man in the corner!

JerzyK appeared next with Brugg and my word, was the finish article a stunner. We were then floored with a beautfiul (if he can be called that) Akhaz. 8 well deserved and beautifully finished points for you sir!

So, for the Kindreds, I count:

39 points for the Fomoraic
12 for the Norse
8 for the Ysians.

Well done to those who finished their pledges. To those that failed, there's always next time.

JerzyK wrote:So guys, are we going to continue Darklands Hobby Challenge in April? We have to decrease unpainted minis quantity!

Can do. Might actually finish my pledge this time! Anyone else willing to start a new thread?
Top

Rot, forgot to post my models from March. Can I count them towards April? I, um, did all the stuff I said I was going to do.
--Ryan Smith
Blog: http://thebeerwaaagh.blogspot.com/
Twitter: @beerwaaagh
Top
Post Reply
43 posts • Page 1 of 1