For Work in Progress blogs.
Post Reply
3 posts • Page 1 of 1

Malacant was a joy to assemble, and is surprisingly large. I'm confident I can still get him on a 50mm base, but finding a way to travel with him is going to be a challenge. 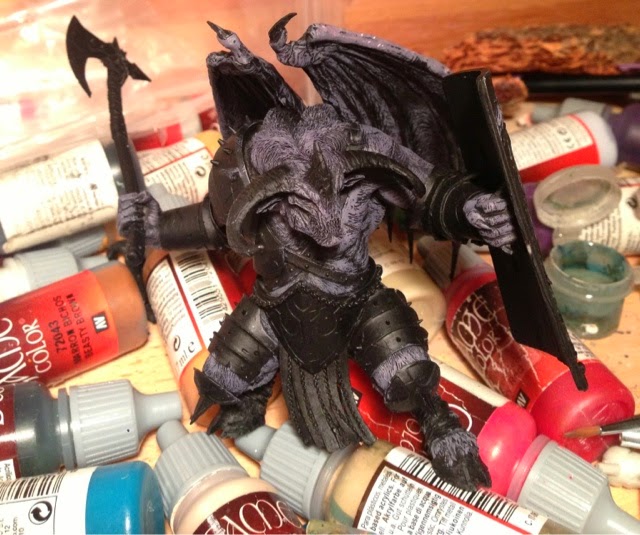 For the skin, I went with a mix of purples and greys, which will allow me to play him as a daemon of a specific god in Warhammer, but let the grey leave me flexibility in playing him as another if I so choose. 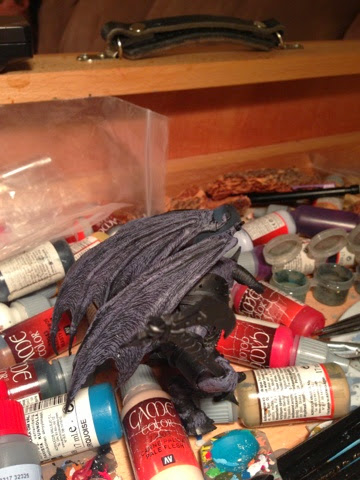 Because of the detail in the skin texture, I ended up doing a lot more semi-drybrushing than I've done in a very long time. 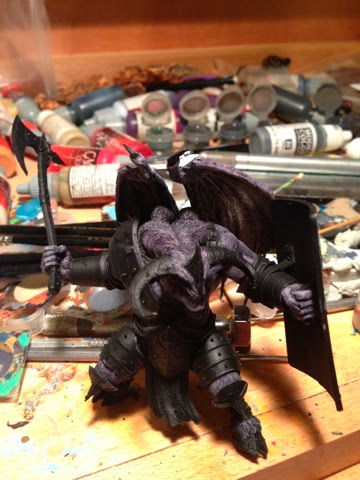 Here we're a couple of layers in. 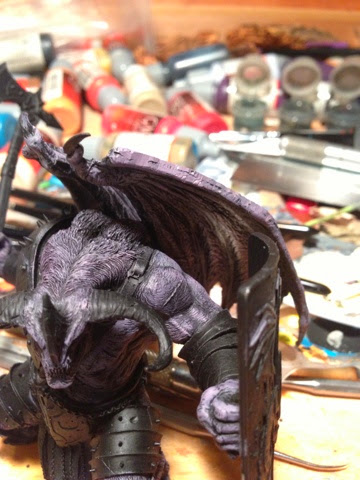 A closer shot lets you see just how much texture is on the skin. 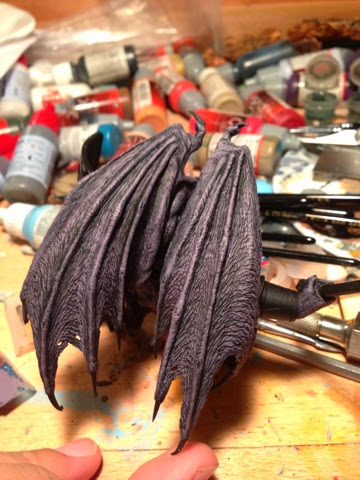 The wings really remind me of rhinoceros skin, which is an impressive thing! 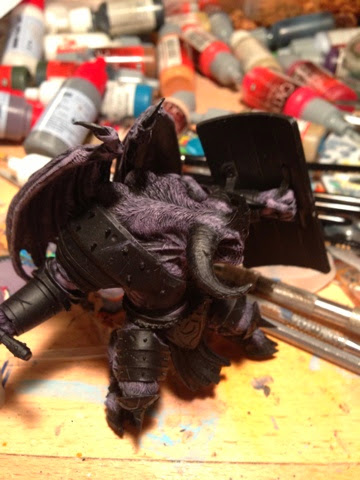 Finally, here are some shots of the skin after the last highlight. I've tried really hard to preserve blackline areas, and have pulled away from my typical severe highlights by narrowing my dark-to-light range. 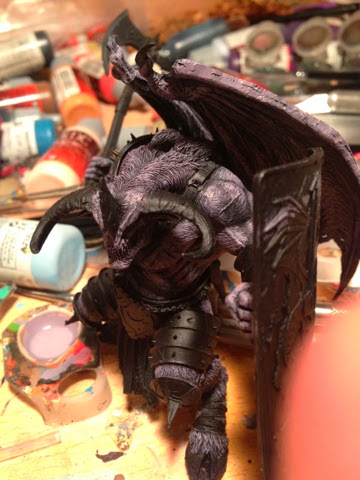 Even though I mentioned earlier that I felt I was doing a lot of drybrushing, there's still a lot of brush work to make this feel clean and avoid having it look like it is drybrushed. The final three layers were all done with layering and feathering, rather than drybrushing, to make the transitions seem smooth. 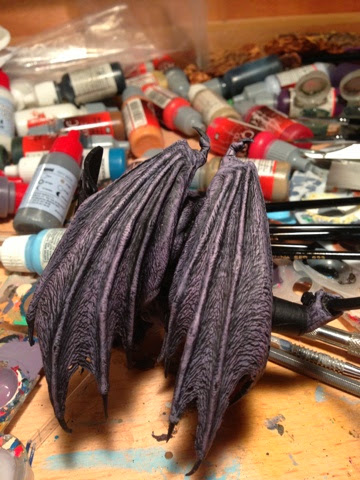 A final shot of the wings.

Next, I started on the bone. I've painted so much bone on this blog, that I didn't take any pictures in progress and just jumped straight to the end result: 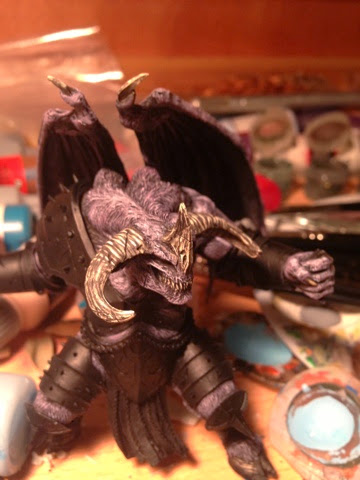 The bone is slightly tinted with grey to bring it in line with the skin tone, but not enough to skew its palette. 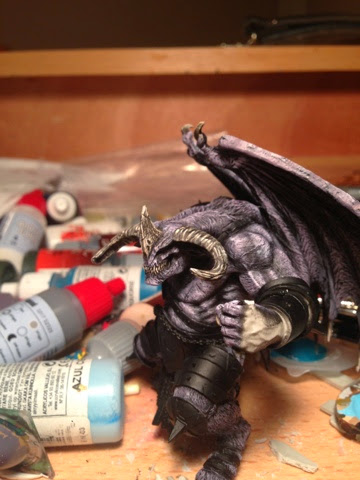 I took his shield off for this step (on purpose) and broke his axe off (by accident) to make it easier to reach some of the harder areas.


For the armor and weapon, I wanted to continue a daemonic fire effect that I began with a Carrowek paint job that has yet to see the light of day here. As his normal mount is in use, I decided to stick him on a cheap corgi toy to show the effect off: 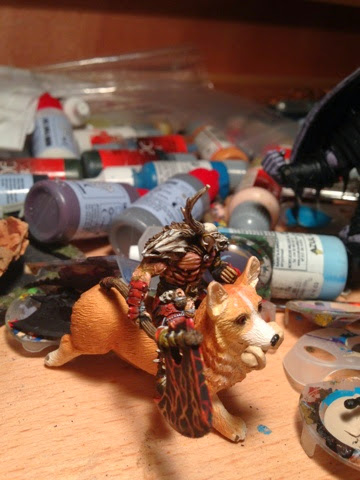 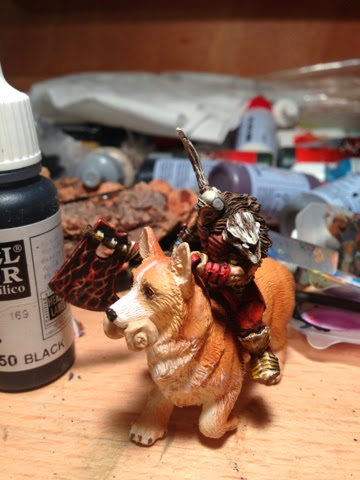 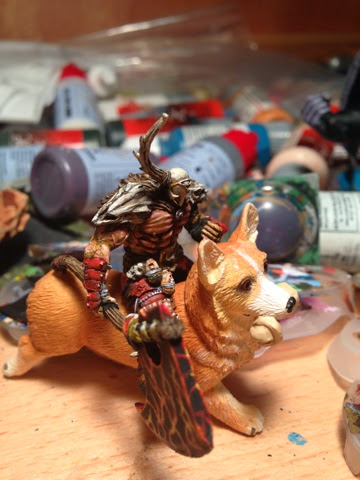 It's a simple blend of red-to-yellow, but I'm hoping that on a black background and particularly with the skintone, it'll work really well for Malacant. 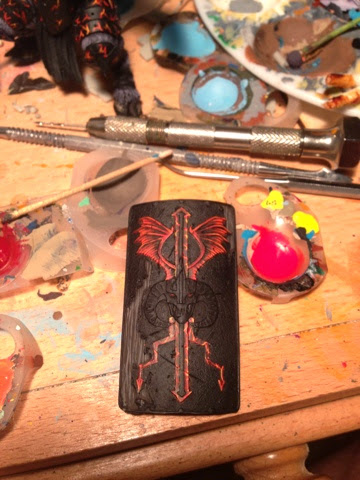 On the shield, I used the same color to do fire effects on the arrow and lightning, while stopping before the last few highlights on the red wings. Malacant is going to fit in my Dragon Cult Warriors of Chaos list, so using red for the wings ties him in with the draconic imagery and Angrislaug model. 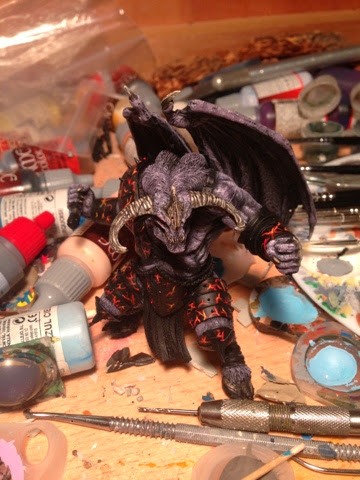 I executed the flame effect on his knee pads, shoulder armor, the interior of his gut plate, and the leg and forearm armor. This angle gives a much better shot of what's going on in his shoulders and on his legs. 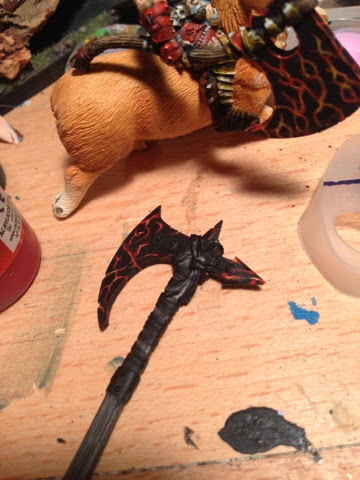 The blade also got the red and yellow treatment, though I went out of my way to make it seem less like fire (as it does on Carrowek's axe) and more like heat cracking through the black metal.

After that was done, I went in and painted a blue-to-green transition on his straps and loincloth. I also decided to do it on the embossing on his chest plate, as I was at this point intending to do his NMM in gold, and it would have detracted from the flame effect inside.
Right after that, I started on the non-metallic metal, and decided to eschew doing gold going with silver to keep the cool grey tones and make the reds and yellows in his armor and weapon pop out just that much more. I used the Andrea NMM color set for this one - the first time I've done NMM using the recommended colors. I was happy with the result, though not with the pigmenting in the last two highlight colors. Those required multiple layers for coverage, and I might switch to a Wolf Grey/Skull White combination instead in the future. 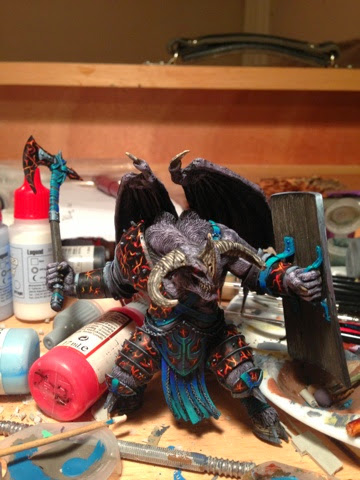 Frontal view with the blue/green and non-metallics about half done. 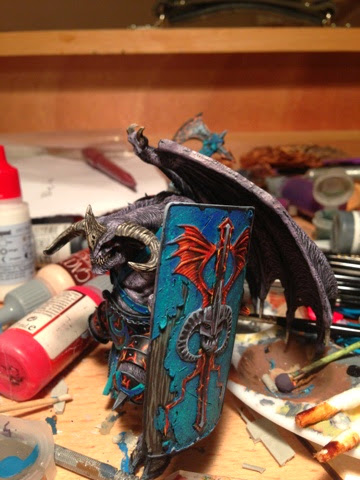 I also did the blue-to-green transition on his shield, using a lot of stippling to draw out the texture of it.
The NMM is about half done at this point. 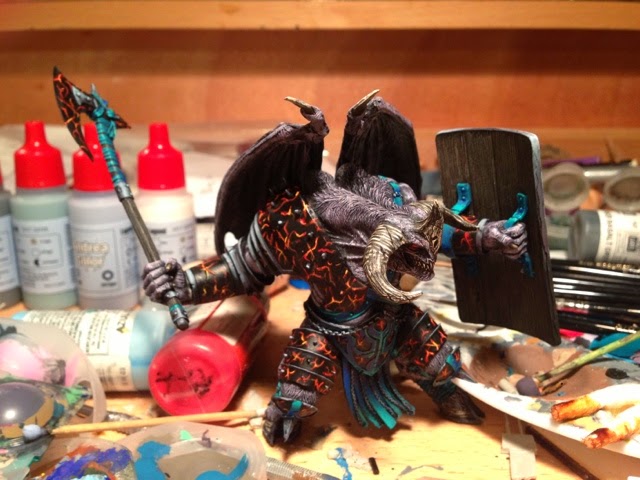 The final of the WIP shots, on the next-to-last highlight. I had to take a break at this point, as my Spurs were tied with the Miami Heat with about 7 minutes to go in Game 1 of the NBA Finals, and my hands were shaking too much with adrenaline to control the brush for the last highlight. 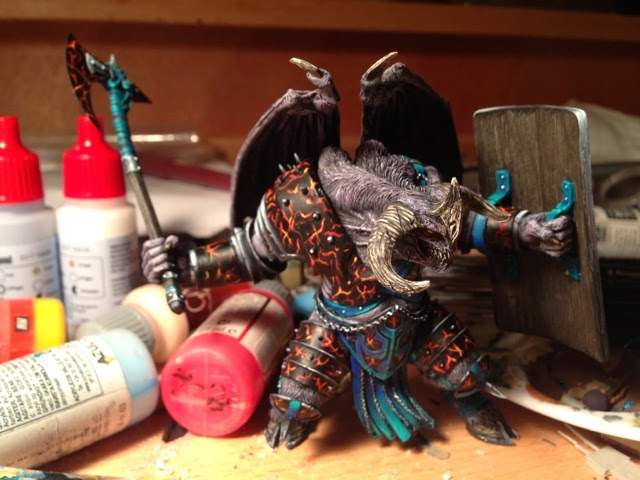 After a Spurs win, I repositioned my light to get rid of some of the glare, and took a few more shots of the finished model. 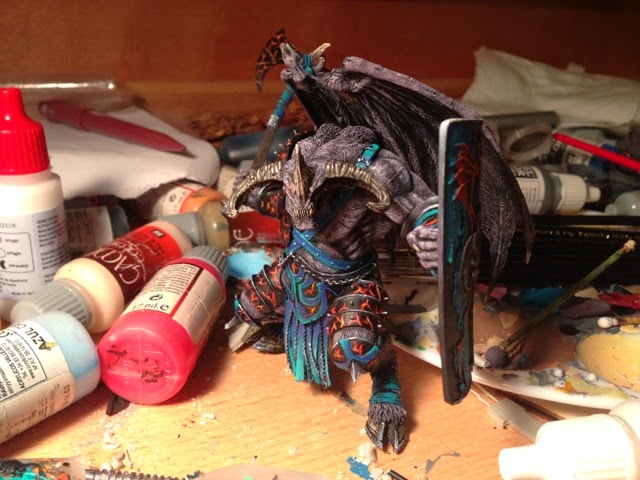 The bulk and menace of this model is amazing. I can't wait to drop him on a tabletop! 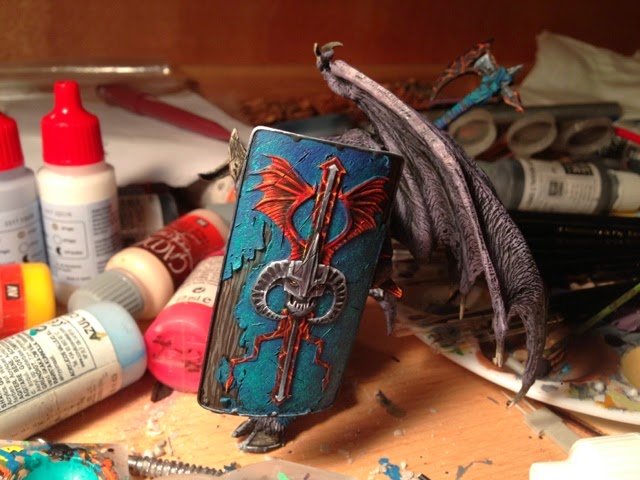 I might have been drinking beer (in good quantity) when I came up with the blue-to-green transition scheme, and I must say I'm thrilled with how it turned out, especially here on the shield. 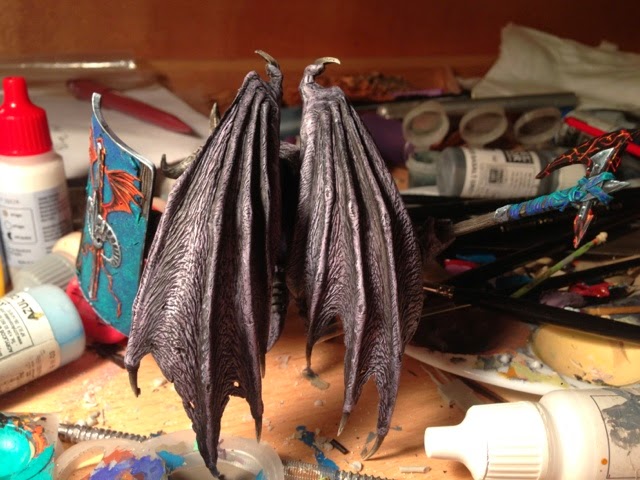 Gratuitous shot of the back of the model, showing how the NMM in the shield flows into the wings. 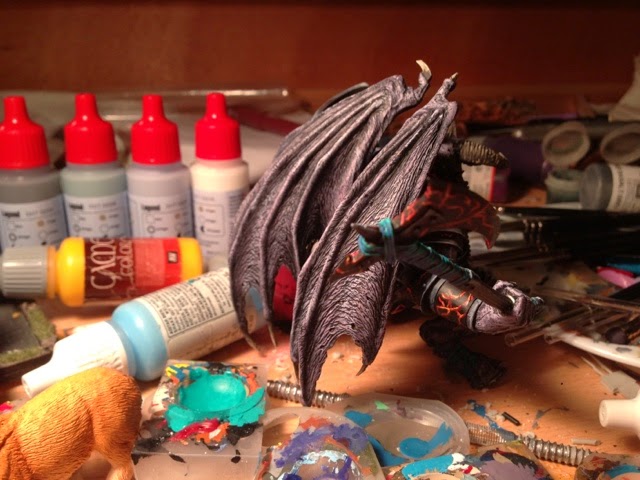 Backside angle, because I'd been drinking and decided this was a good shot? 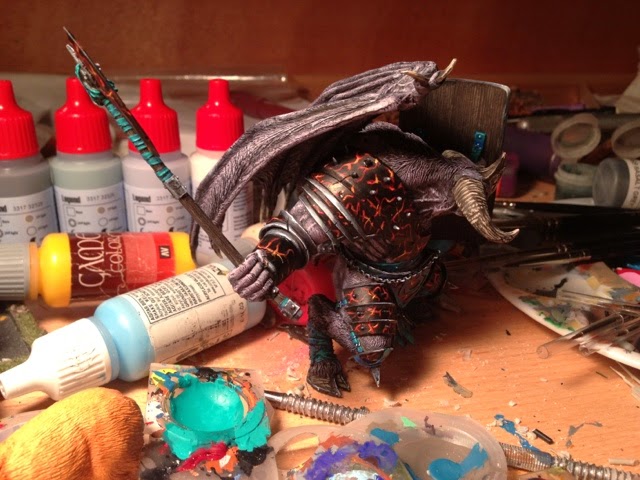 Side view, showing off the NMM silver on his arm greaves (and the slight hint of it on his thigh armor). 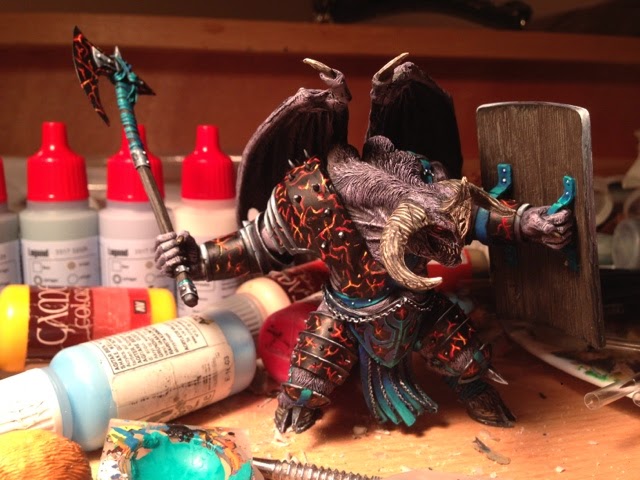 Finally, a shot that shows the flames sort of playing along his body. I'm thrilled with how he turned out.
--Ryan Smith
Blog: http://thebeerwaaagh.blogspot.com/
Twitter: @beerwaaagh
Top

Re: Malacant, Servile Champion of Dis

Good job! I would only make those heat cracks lighter - maybe add some bright yellow/white in the centers of those cracks.
My painting blog:
http://chestofcolors.com/blogs/jerzyks-corner/
Top

Re: Malacant, Servile Champion of Dis

Not really loving the armour as much as I thought I would, but the shield just pops. The reds are glowing. Really solid work again, you are like a painting machine. Top drawer, really excellent work.
“Pain is temporary. It may last a minute, or an hour, or a day, or a year, but eventually it will subside and something else will take its place. If I quit, however, it lasts forever.”Lance Armstrong
Top
Post Reply
3 posts • Page 1 of 1

Return to “Work in Progress”