Just got approved for the WAMP entry. Lots more pics to come once I get them all uploaded to my blog, but for now, here's the WAMP entry collage. I might go back this weekend and reshoot the unit shots and delete/re-enter the contest, as the group photos have bad color balances - my lighting rig is too small to handle three 100mm bases! For now, though, here's how they turned out:

Your wish...
Copied and pasted of my blog entry here. Feel free to visit for a couple of bonus pictures, and a bit more discussion of why there are 50mm x 75mm square bases cut into the Darklands bases.
As always, comments and criticism are welcomed!

Well, the Brythoniaid Cawrdraig that I've spent the past five weeks converting and painting are done. Unfortunately for me, my lighting rig is too small to hold three 100mm round bases. As a result, the photo quality on these bad boys is not as good as I'd want. 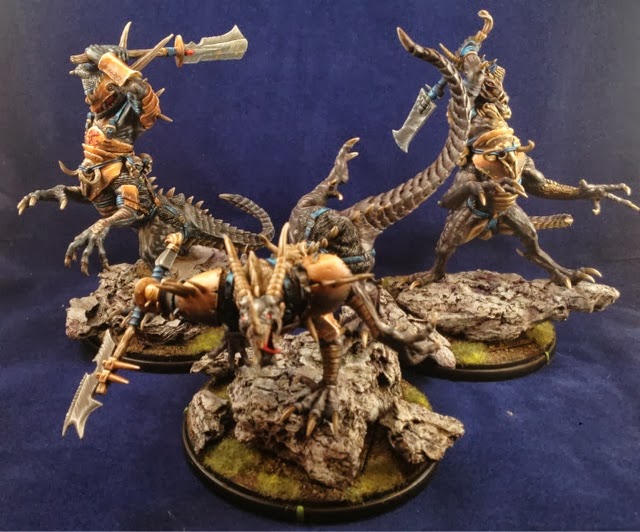 The unit of Cawrdraig. I ended up going in and doing one more highlight on the unit's skintone, which I'll probably do a blog post on later (that last highlight is always important). I'm much happier with these guys than I was even two days ago, purely because of that layer. 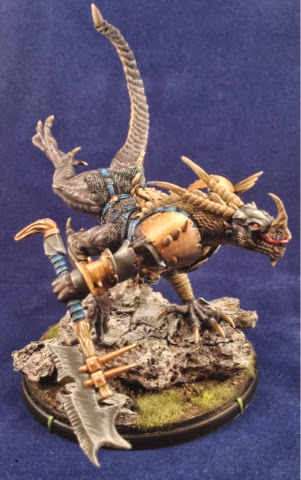 Two shots of the most heavily converted model first. If you're curious how he was built, you can check out the WiP here. 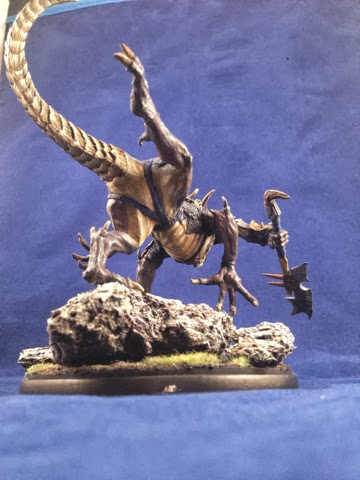 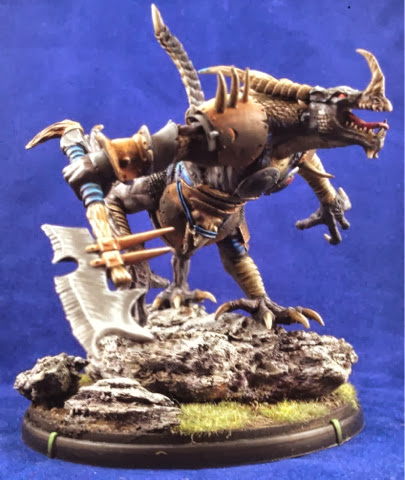 Model's eye views are one of those Finished Model trademarks of mine, so I'll gratuitously insert some for each model. If nothing else, they help show the bone/brown underbelly. I'll continue this scheme on all the Brythoniaid dragon-kin (and probably also use it on my Norse Trolls, who are on the short list of what I want to paint next). 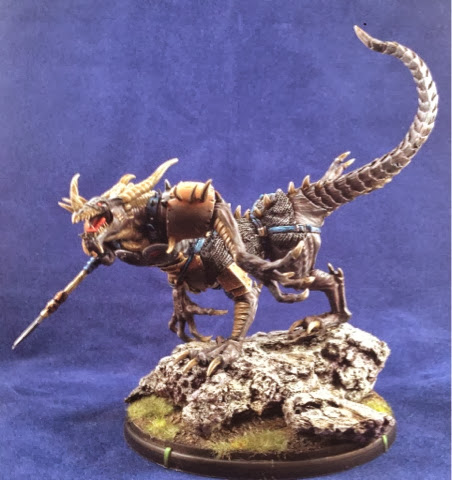 I love this angle, because it shows off how dynamic the re-positioning of the limbs ended up being. I was very pleased with how this conversion turned out. 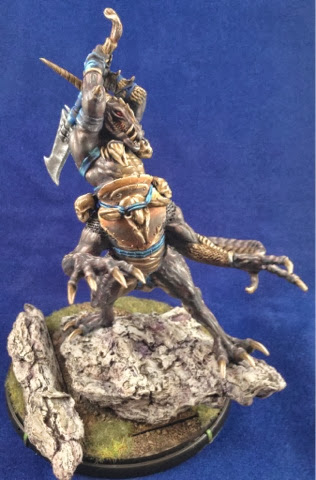 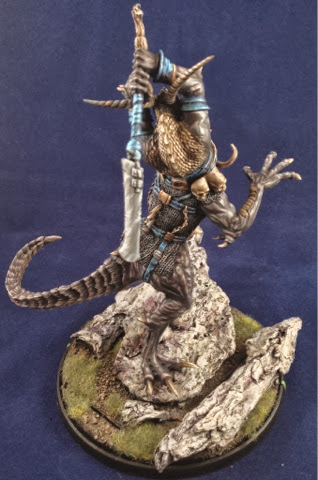 Front and back of the second converted model, whose conversion was actually much easier. Except for the part where I made a horrible mistake. Also, here's a rock, let me stand on it! The seams in the base are more obvious here than I would prefer, and I'm hoping it won't hurt me in the WAMP entry. You'll see what that's all about at the bottom of this post, when they magically come off their Mierce bases. 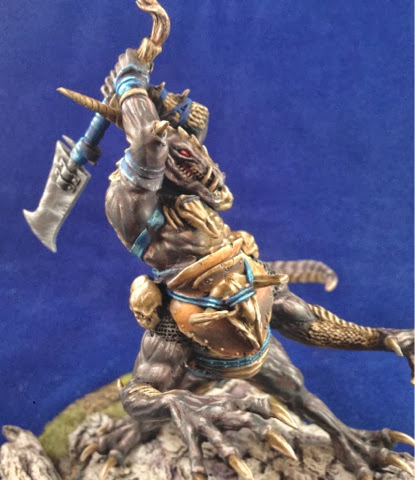 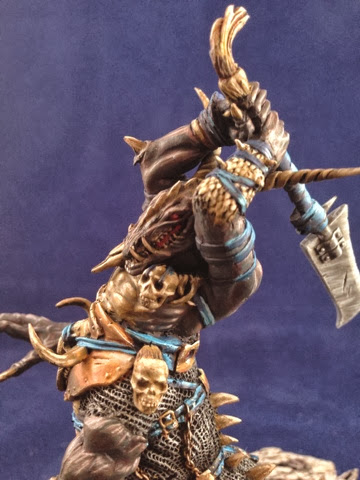 A pair of upper-torso shots. Roberto Chaudon's sculpts are wonderful to paint, and practically paint themselves. I don't know how he finds the patience for all those scales. 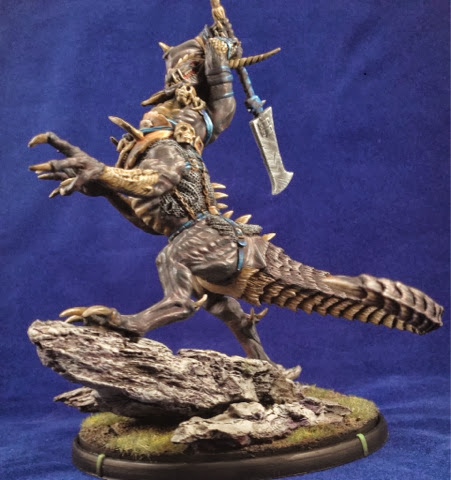 Model's-eye shots? Yes please! Also, I felt that Aradae was missing the obvious Mierce signature - standing on a rock. So I added a rock to the base so he could do it. In seriousness, those rocks serve a very important function - the removable base insert is 75mm x 50mm. Aradae's footprint will not fit on a base that small - he needs at least 85mm of space or a 60mm width (for a wider stance). As a result, the two models in this unit that are using the out-of-the-box Aradae legs need to be mounted on something to extend the base, so that both feet can touch the ground, while fitting the 75x50 restriction. The running conversion was converted with his legs all contacting that 75x50mm profile, but with the other two on rocks, his outstretched arms collided with the legs of the other models in the unit when I tried to rank them up. As a result, he got a rock of his own as well. 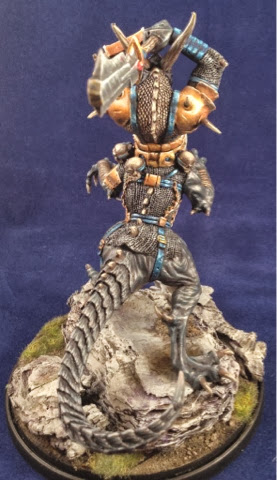 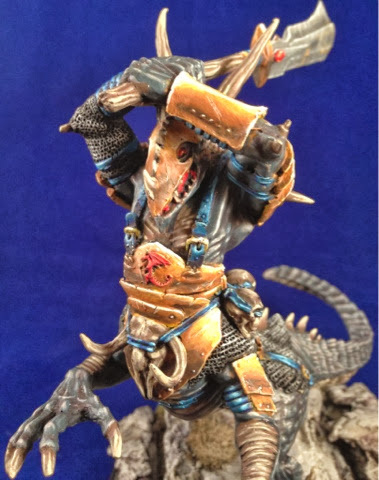 Aradae Mawr from the back and facial. The paint on this one was well documented here and here, so you can jump there if you need more info. 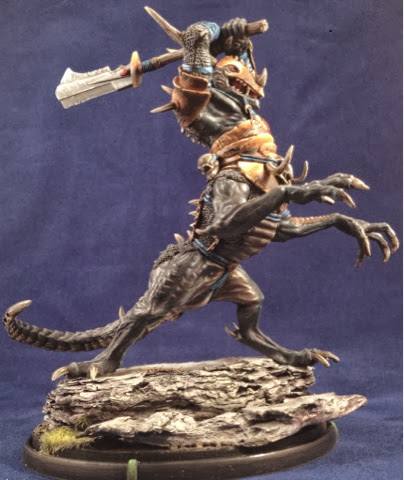 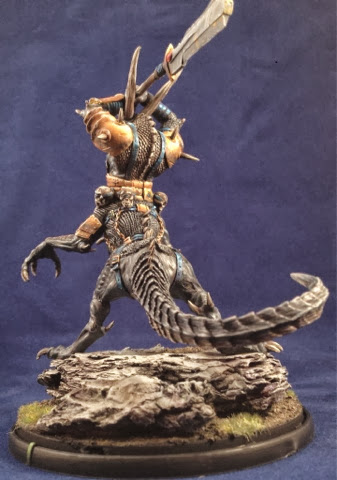 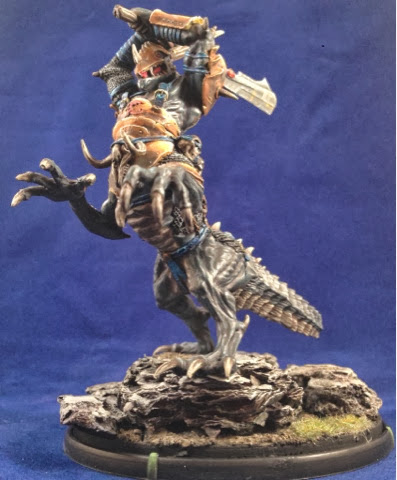 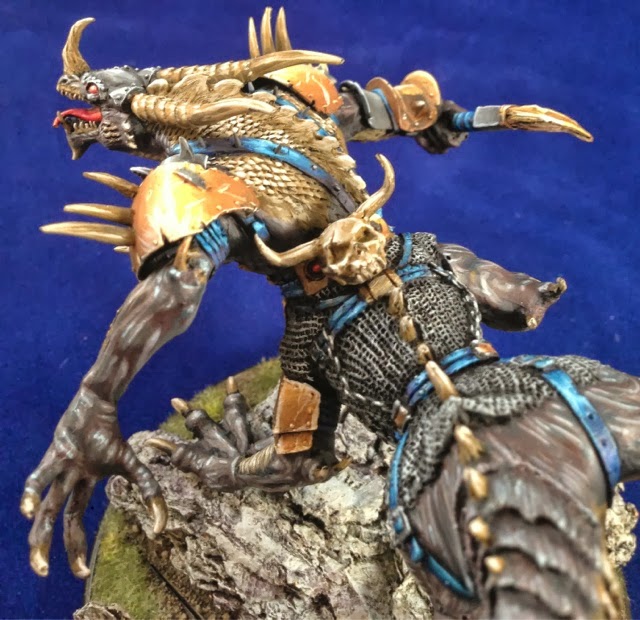 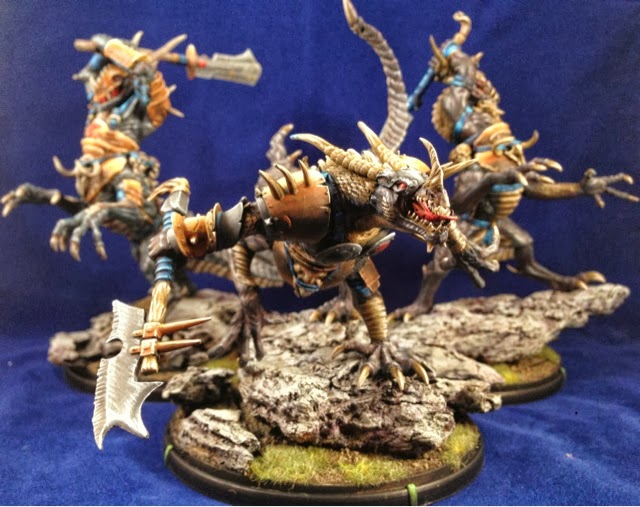 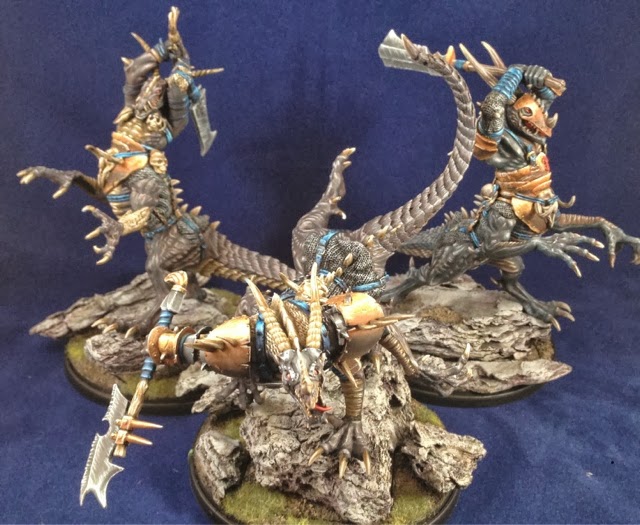 As you can see from this photo and the one above it, my camera apparently decided to just arbitrarily decide to swing its color balance from image to image. Which one should you trust? Neither! #nofilter 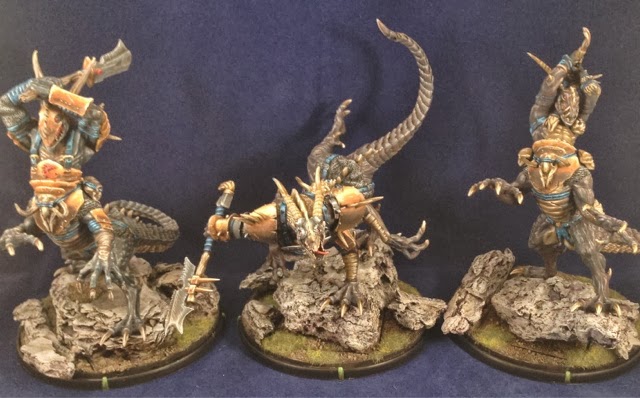 This was my first attempt to photo the unit. Side by side, you can see that they only just barely fit in the light box, and the reflection of light from the sides completely blows out the color balance and make the whole thing seem brown. Pictures like this really make me want to come back and reshoot the entire thing.

I tried a model's-eye view, and it really made my space limitations visible. There was absolutely no way to do it without getting the boundaries of the light box in frame. Stupid ridiculously gorgeous massive models...

So, earlier I mentioned the seams that are visible in some of the bases, and talked about the 50mm x 75mm inserts. The reason why is this photo, which shows the three of these lined up as some kind of Draconic Ogre unit. 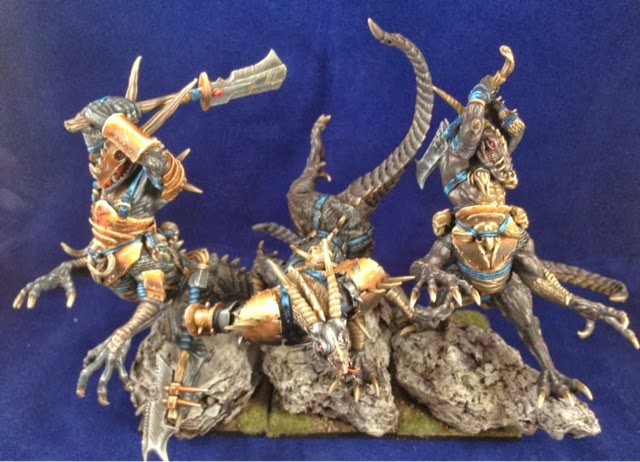 View from a bit above. All the conversion work on these models was done with this positioning in mind. The arms, weapons, and tails were posed and re-posed to make this ranking possible. 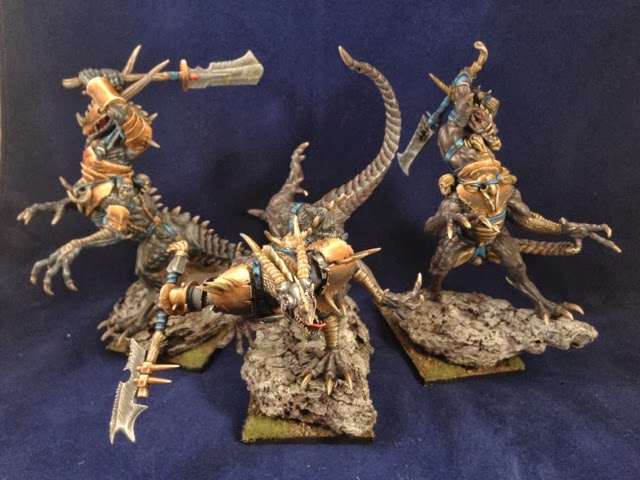 Breaking the unit apart on their individual square base inserts.

Finally, a random action shot of the Cawrdraig invading a City of the Damned game. 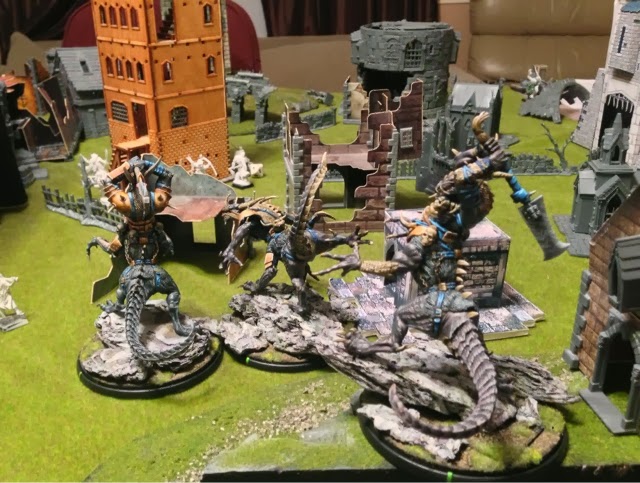 Just an all around achievement.
Top

Your Wamp entry is amazing.

I'm expecting to see more miniatures painted and converted by you.

All of them ade pretty cool but my favourite is the one who is using his axe wiith a down hit. Very dinamic pose.

These guys are absolutely awesome! I love how they became three distinct miniatures with some conversions, and the paintjob is not to shabby either,
Top
Post Reply
7 posts • Page 1 of 1