I had the unfortunate experience yesterday of having to get a tooth filling drilled out and replaced. Fortunately, Mierce Miniatures had anticipated my pain, and when I got home, I found a small brown cardboard box containing the bone-aberrant Torku, and the Norse Troll starter set! It was the laughing gas that caused me to just jump into the box, I'm sure of it... 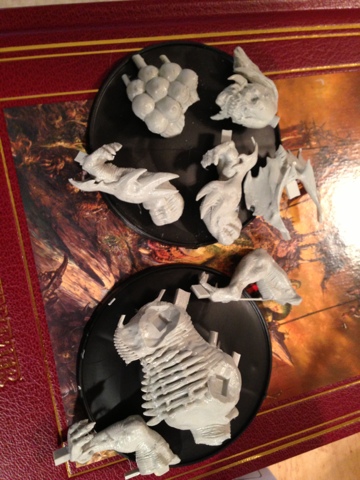 First up: Torku, Bone-Aberrant! This chick is large. No, really, she's a lot bigger than I thought she'd be. I'd intended to put her on a 40mm base and use her as a Not-Lawful McFarlane Creation, but its going to take some very creative posing, or a very well designed base, to make that happen! The circular bases she's on are 120mm, so imagine trying to get the model onto something a third that large. 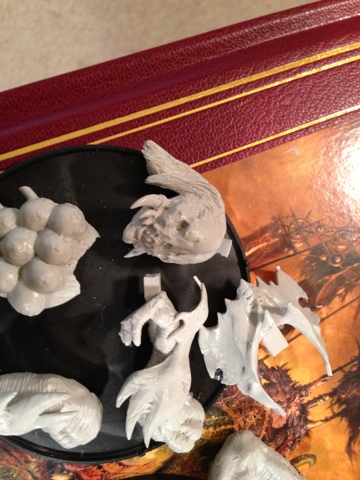 A close-up of the head shows just how unnatural this model is. It conjures, to me, images of an undead giant spider. I do like that the rows of breasts are optional, so I don't have to include them. I'm not sure if they take away from the external skeleton design of the model, or if they're just one more unsettling part of the sculpt. I might just try to magnetize them on, so that I can remove them for family-friendly games.

Next up: the Norse! 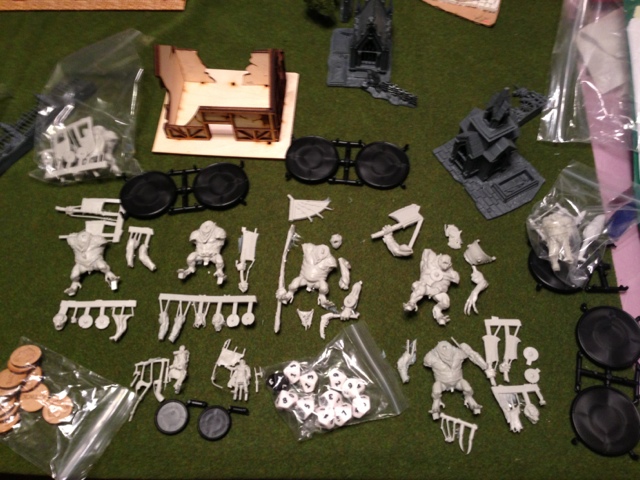 There's everything in the starter set! I've left the dice and templates in their bags, as we all know what they look like, as well as Urbad and the extra troll. 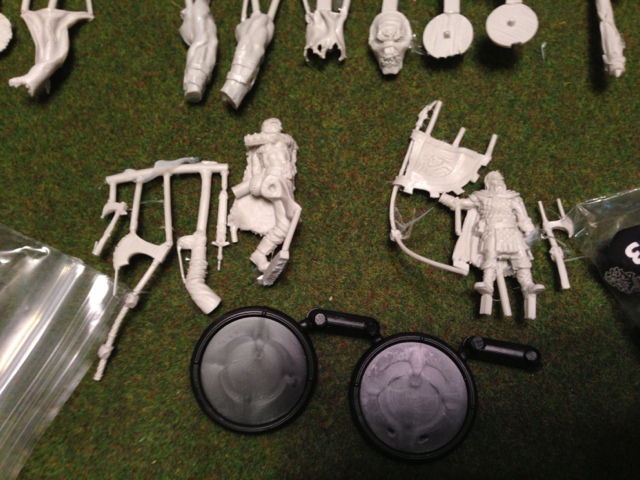 The two human infantry models look great, though you can see that the banner pole for Kjartan of Jylland is significantly bent. I haven't had a chance to straighten it out yet, but I'm very nervous about doing so. If you're worried about the Angelcynn spears, this is might increase your concern. However, its worth noting that the temperature has been hovering between 95-100 degrees here (more than 35 for you chaps on the other side of the pond) and this box was in a non-air conditioned environment for at least a day at that temperature.
I love the pose on Eirik, and can't wait to get some paint on him. A bit of bending occurred on his axe as well, but I'm confident that I'll be able to get that little kink fixed; it's the 90-degree bend of the flagpole that I'm skeptical about. 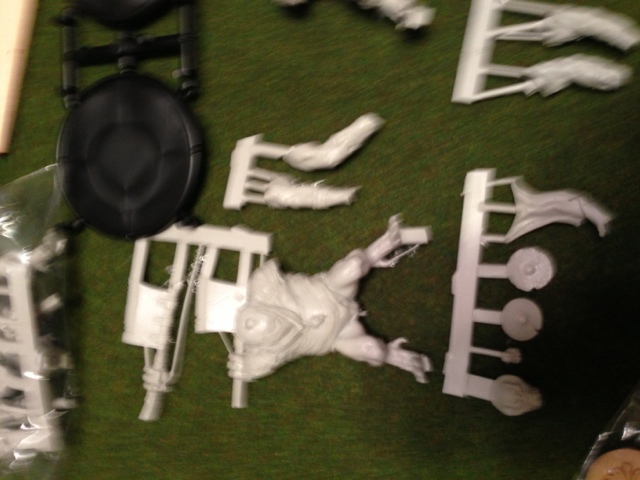 This slightly blurry troll is the one I got a duplicate of. I love how heavy and deadly his cleavers look. 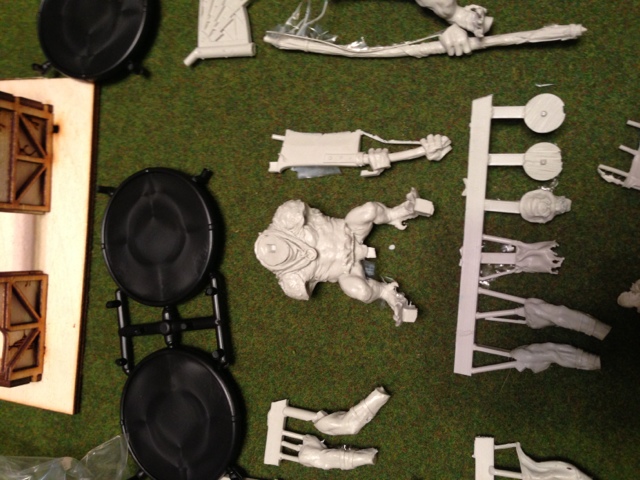 I believe this one is Unnolg. You can see a bit of flashing, but you come to expect that from resin miniatures. 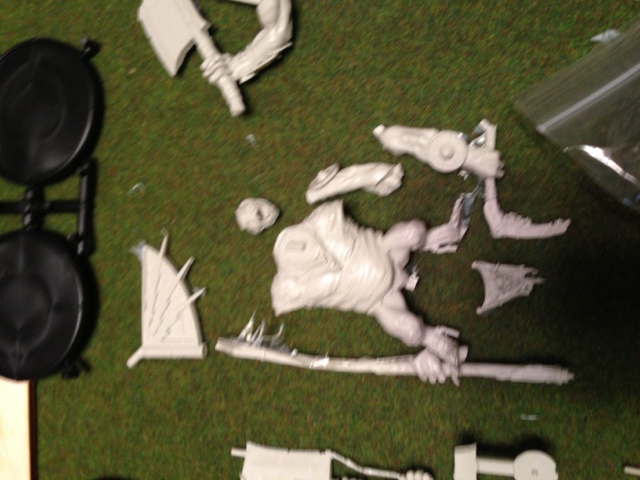 Gjoll, the Vane-Bearer. Again, the standard pole seems slightly bent, but I'll chalk that one up to it being sculpted as wood, and thus not necessary to be perfectly straight. 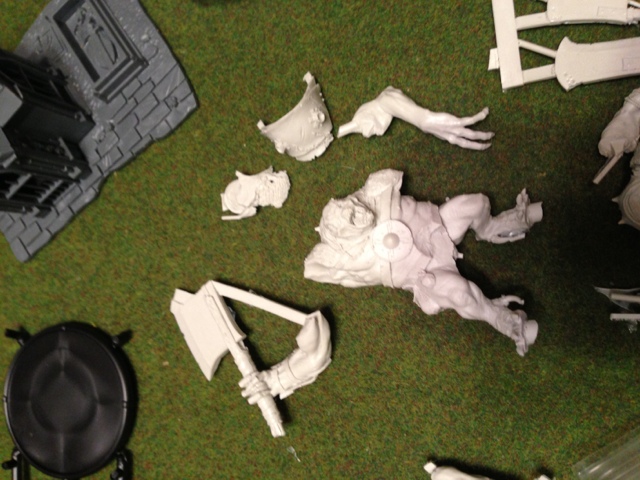 Vortun, the troll Jarl is pretty big! What a mighty cleaver he has! 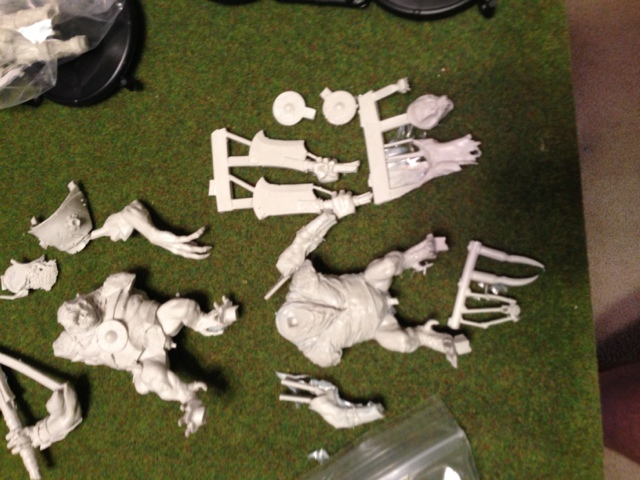 The last of the trolls. Again, lots of flashing that will need to be cleaned up on the loincloth/head sprue. It's still better than anything you'll have to deal with that's made with some other company's resin. 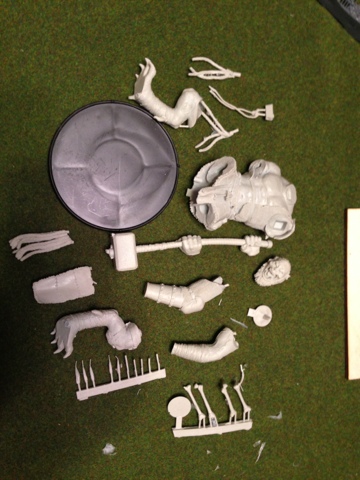 Though he came with my first starter box, I took this opportunity to pull out Mjagnir as well and ooooh and aaaah over him. 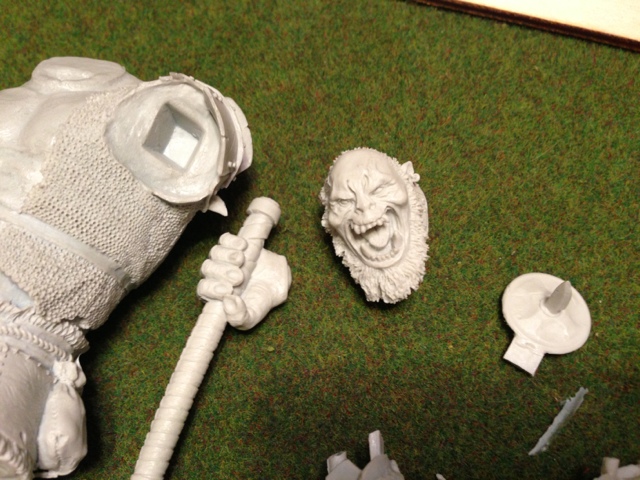 What a smiling, happy face! It's also almost at large as a Orbital Assault-Landing-Soldier. 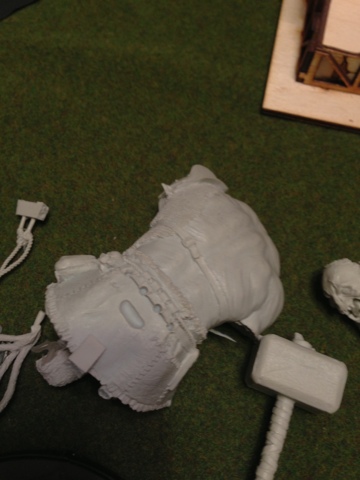 With all the exposed skin on Mjagnir's back, I can see why a lot of painters are using it as a canvas for freehand tattoo work. 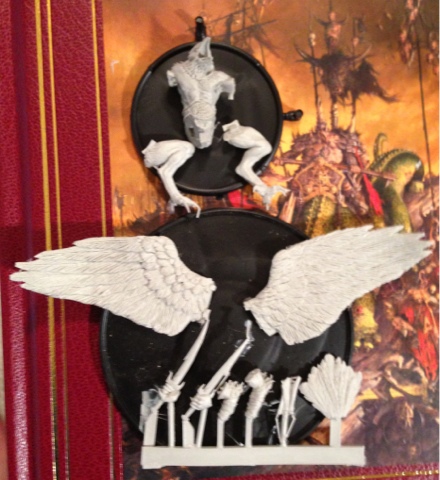 But wait, what's this? Oh, that's right! The last model I'd ordered for the Norse is in the box as well! I give you Grimmin, Hrafnmann Champion! 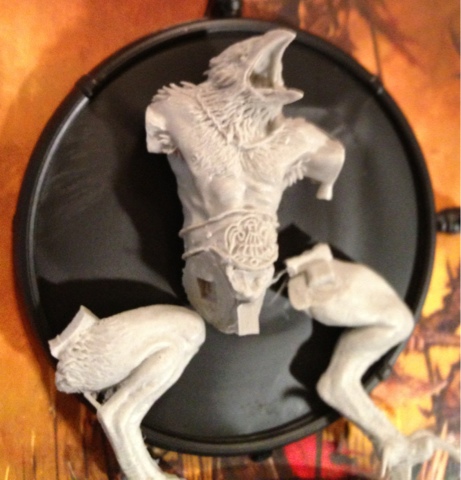 With the expression in that beak, I can just hear him yelling, "DIVE!!!" I also love the detail of having the Norse faction symbol on his gut-plate belt. 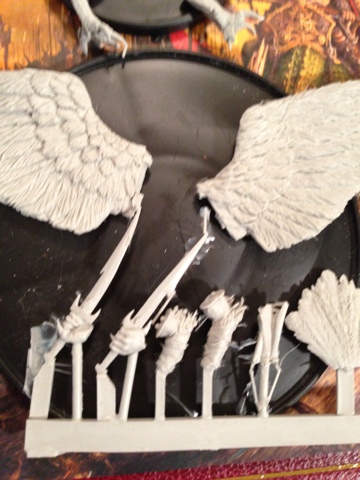 Wings, arms, and tail feathers. Tonight I hope to play a bit with repositioning the arms. Being able to do so might encourage me to order a few more of these bad boys.

Re: A second wave delivery thread!

Straightening the standard is going to be easy,

boil a kettle, pour into a mug and dip the standard pole in and it will go as soft as cooked spaghetti and just hang down into position, set in a mug of cold water

all your goodies look so good I can't wait for mine!
Top

Re: A second wave delivery thread!

Awesome stuff. Cant wait to get my stuff.