This is my first post, been lurking on the forums for a while and thought I'd finally join in, I've been an avid war gamer for nearly 20 years on and off, this time around I've been looking into other game systems and found Darklands, I love the miniatures and the rules are great based on the couple of test games that I've played.

I started my armies thinking i would convert miniatures that I had already into Darklands armies using miscast parts to fill any gaps in my bits boxes, however once the miscast pack arrived I realised that the level of detail and the quality of the models on offer would mean that most parts that I have would not fit with Mierce parts.

Therefore I revised my intentions and started to repair and build models that I had enough parts for from the miscast packs that I had purchased.

The first of these repairs was a Mægenwulf built from an assortment of bits: I actually had enough parts to make three of these monsters! I only put one onto a base, the other two are in the same stance and are ready to stick on bases as and when needed!

The next was a Werwulf Thegn: I know he is missing a cloak and his scabbard but I like how he looks without them, I imagine he has discarded anything that may encumber him in combat before charging into the front line!

Finally I also received (in a different pack) most of the new Dewindraig, so I present, Derwyn the the Unbroken, captured and tortured by the Ysians for years, losing part of himself to their butchery he finally escaped his prison, killing his captors in a welter of magical fury, only just sane and ready to be unleashed onto the foes of the Brythoniaid: I'll post some more when I have more done! Next on the work station is a unit of Wælwulfs, a unit of Dyndraigs and a Gwyfern!

Welcome to the Dark Ages..

Nice conversions, love the little back story on Derwyn.

Where are you from?
Devlin Brightblade, Lord of Saxon Hammerwich, Slayer of Trolls, Tamer of Manticores, Petter of Flint Flang the Kill Thing from the Infernal Pits..

Looks ace! Wishing is have picked up some miscast packs now!
Top

Thank you for your kind comments! I'm from Selby in North Yorkshire, England. The miscast packs are well worth getting, I've barely brushed the surface with the parts that I got, I've only done the "easy" conversions so far, I have more to go. I am currently putting some test schemes together for a Gwyfern for the Brythoniaids, currently thinking red/brown with a lighter underside.
Top

Theres a group of us who play in Staffordshire, and a group who pay in Warwickshire, if you ever fancy a road trip let us know and we can set a few games up for you..

Good luck with the Miscast packs, myself I have about 15 models that I havent even put together yet...lol
Devlin Brightblade, Lord of Saxon Hammerwich, Slayer of Trolls, Tamer of Manticores, Petter of Flint Flang the Kill Thing from the Infernal Pits..

Thanks for all the lovely comments on my previous post,

So I was going to wait to post these but I'm super excited about the progress so I thought I'd stick them up now.

I've been working on a Gwyfern that I got some of the parts for from the miscast packs I mentioned before, I had the main torso (from the Cawrgwyfern), the tail section and the upper head (all of which needed slight fixing/pinning due to the defects which put them in the miscast packs but all of these were minor compared to some of the repair work I've had to do from other companies on models actually sold as fit for sale) so I started by fixing and sticking these together with some legs I "borrowed" from one of my daughter's dinosaur toys.

At this point I was stuck, the use of the Cawrgwyfern meant I needed to sculpt arms and a club, but then I thought why not add wings to the brute and make it a Gwyfern instead? So I did. 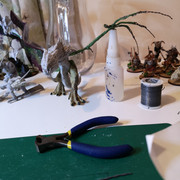 So I started with a wire frame and got it stuck on, then using papier mache, i fleshed out the wings and started sculpting (I'm also playing with colour schemes as you can see from the next picture) 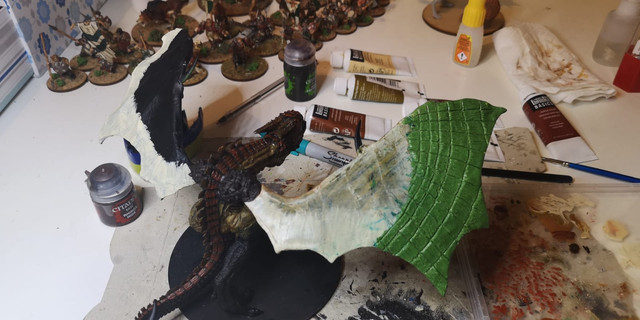 Let me know what you think guys?

Hey, looks really good, obviously very talented in that area, myself, I'm pretty much all fingers and thumbs...
Devlin Brightblade, Lord of Saxon Hammerwich, Slayer of Trolls, Tamer of Manticores, Petter of Flint Flang the Kill Thing from the Infernal Pits..

As you slide down the Bannister of Life, may the Splinters be kind...
Top
Post Reply
10 posts • Page 1 of 1