Right, I'm travelling down to Jon Chester's tonight and I'll try and do some kind of battle report. Been ages since I've done one.

And in the blue corner:

Ahh yeah thats a fair reason hahah
Ive found so far demilegionaiires butcher things, well mine have a thing for killing oghurithne and gairlorm, there also a good solid option for holding battlelines due to fearless
Im also having fair success with ignilegionaiires at the moment but i havent tried them against anything bigger than 60mm yet, got a feeling they might get squished
Top

Right! I will be updating this shortly, with pics and everything.

Right then! Been a while since I've done this so excuse me... and my photographs.

We used a few proxies on both sides so please excuse that too!

Jon was the Defender and Rob was the Attacker; Rob added a patch of rocky ground and Jon swapped a hill for a field.

HOUR 1
Jon took the initiative and immediately Vado!ed the Tarask forward, then Charged the Sávrakontar who managed to cause a few wounds with a Hold and Shoot on the way in. The Tarask didn't do a great deal either, although he and the Bestiarii still won the combat after the Sávrakontar killed a couple of Bestiarii and wounded the Tarask further. The Sávrakontar rolled 00 for their Panic reaction, so stood where they were in defiance!

Retaining, Jon's Onager knocks out a Sávrakar and does 7 wounds on him and the unit, adding a few fire tokens for good measure.

I finally get to go and the Krokod moves forward, Roaring with little result against Jon but making sure two of my units become exulted (including the Sávrakontar engaged with the Tarask). 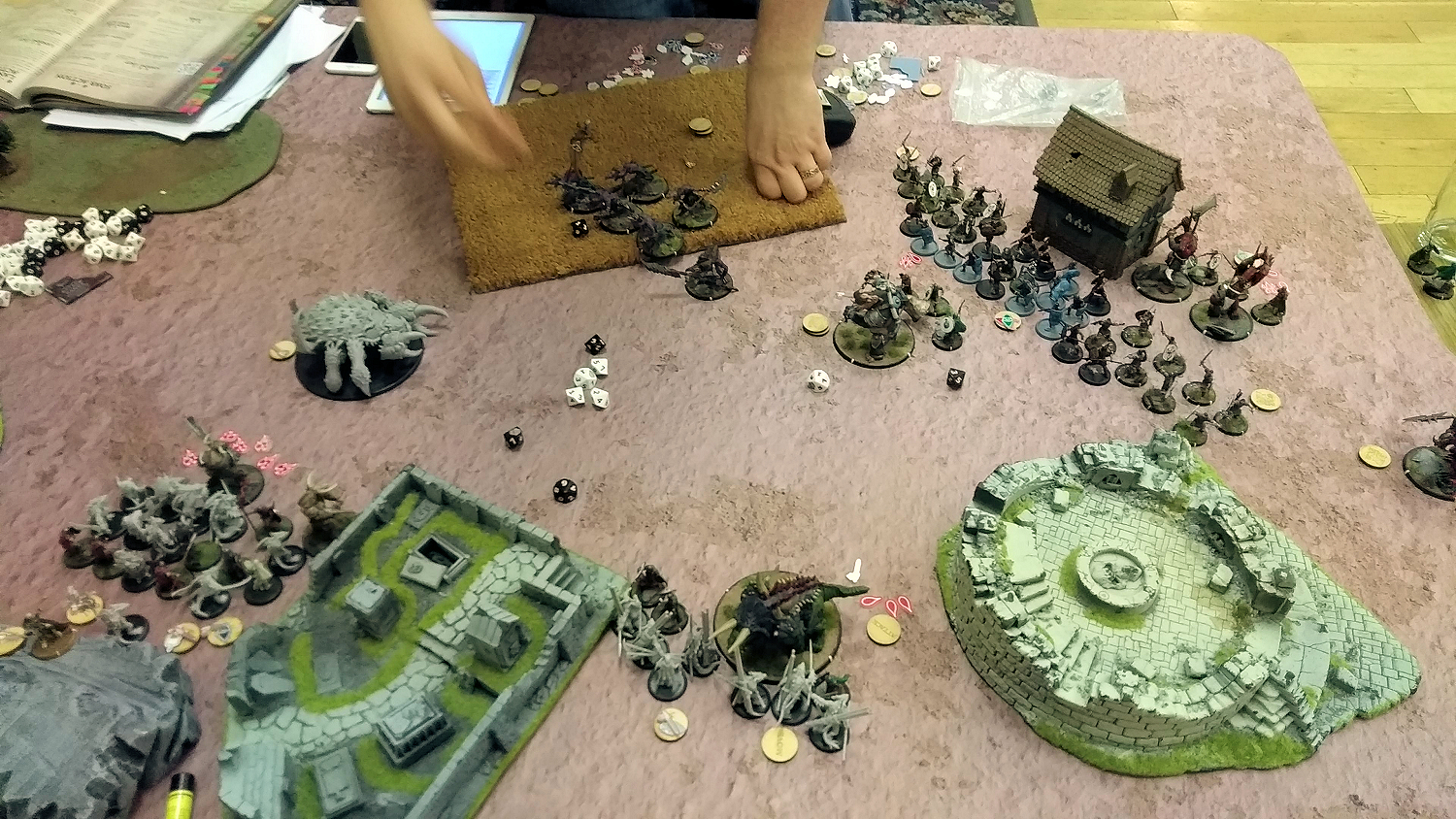 The Dromedus near the Krokod Shoot him with pila and spit too, causing three wounds and three corrosion effects (which will do nothing against the Krokod as he's in his underpants).

The Szalamandra Run towards the Dromedus and miss completely with every Fire Gobbet shot, although a handy 0" scatter ensures they do a wound and some fire damage on the unit.

Jon's wizard tries a couple of things but my Sávrargós Earths and stops a Demonfire. Hellfire does not and he Shrives successfully.

I unveil a Scouting unit of Sávrakontar who Run towards the Onager with fire pot, ensuring Jon's nearby Auxilia Sagittarii perform a Shoot reaction (killing one) but the Sávrakontar do nothing with their shots. 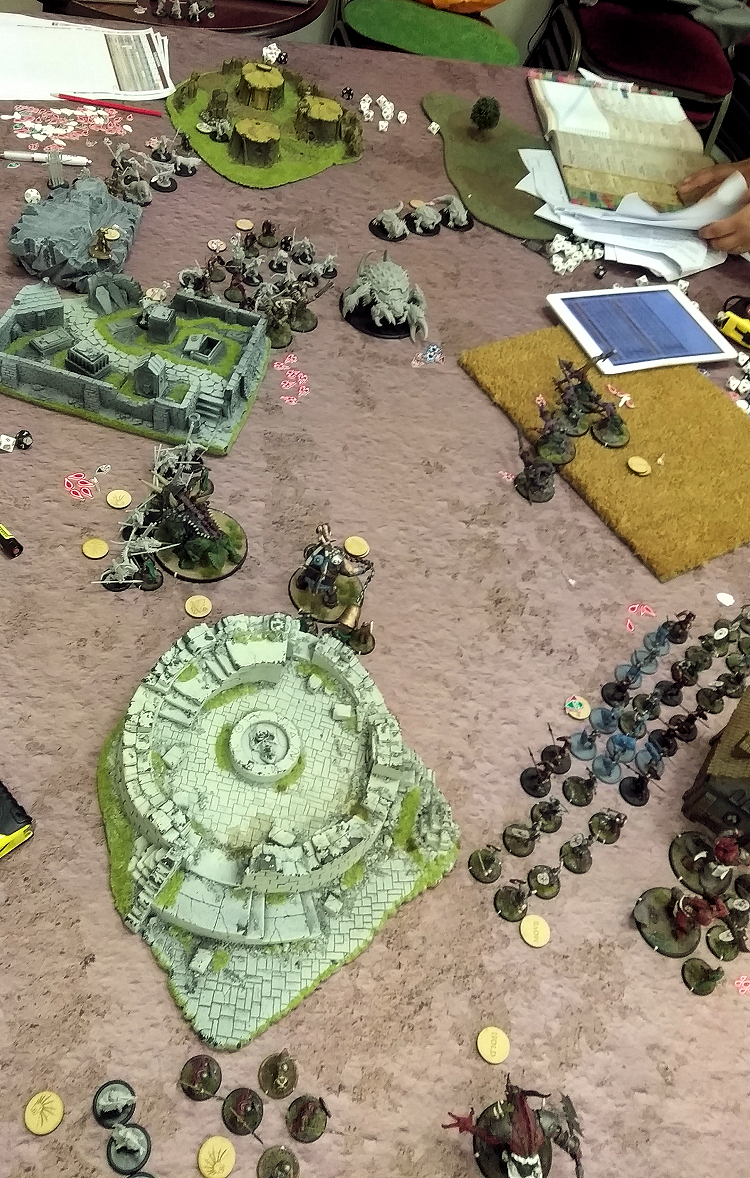 The other Auxilia shoot the Krokod, causing three wounds. My Sávrargós tried a Bleed invocation upon the Tarask but Jon stopped it with an Earth reaction. My plan unveiled (the Tarask would have been on difficult parries), I still decided to Bask the Sávrakontar in combat with it who caused a couple of wounds here and there.

Rob's Megakontabolos battery can only see the Dromedus and kill one, adding a couple more fire tokens to the mix.

Jon's Onager with fire pot chucked one at the Sávrakar, almost killing another.

The other Sávrargós then Basked the Szalamandra, who shifted forward and shot the Dromedus, killing one and adding another fire token.

My other Scouting Sávrakontar popped up in the same place and shot the Onager to no effect whatsoever. Bloody shooting at engines rules! Who invented them anyway?

HOUR 2
The Sávrakar failed their SKILL TEST for the fire effects and one died as a result, and Rob took the initiative.

The Krokod weighed up his options and Charged the Dromedus unit, murderising them until only the Dromedus Secundus remained, on five wounds left. The Secundus, being a stubborn git, passed his Panic reaction and prepared to die for his Legio. 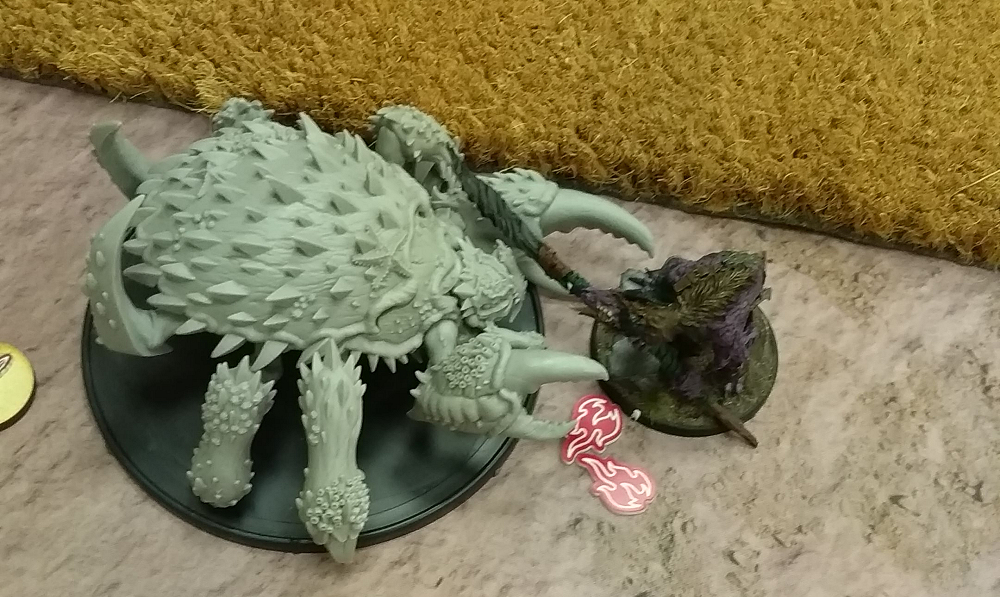 Jon Retained with the Auxilia Sagittarii near the Onager with fire pot and Engaged and Shot against the Scouting Sávrakontar, who died miserably except for one, who Fled, only to be Chased down by the Sagittarii, who then Engaged the other Sávrakontar. 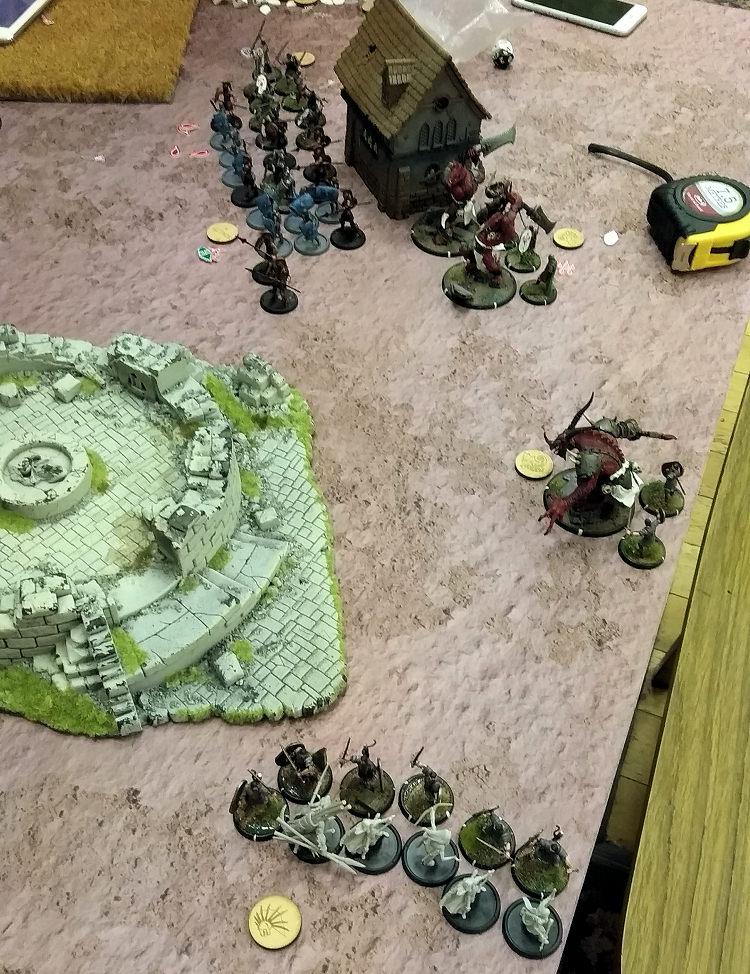 The Szalamandra take the opportunity to Walk forward a little and burn up the Hippoxus rather successfully, causing a few wounds and adding a few fire tokens. 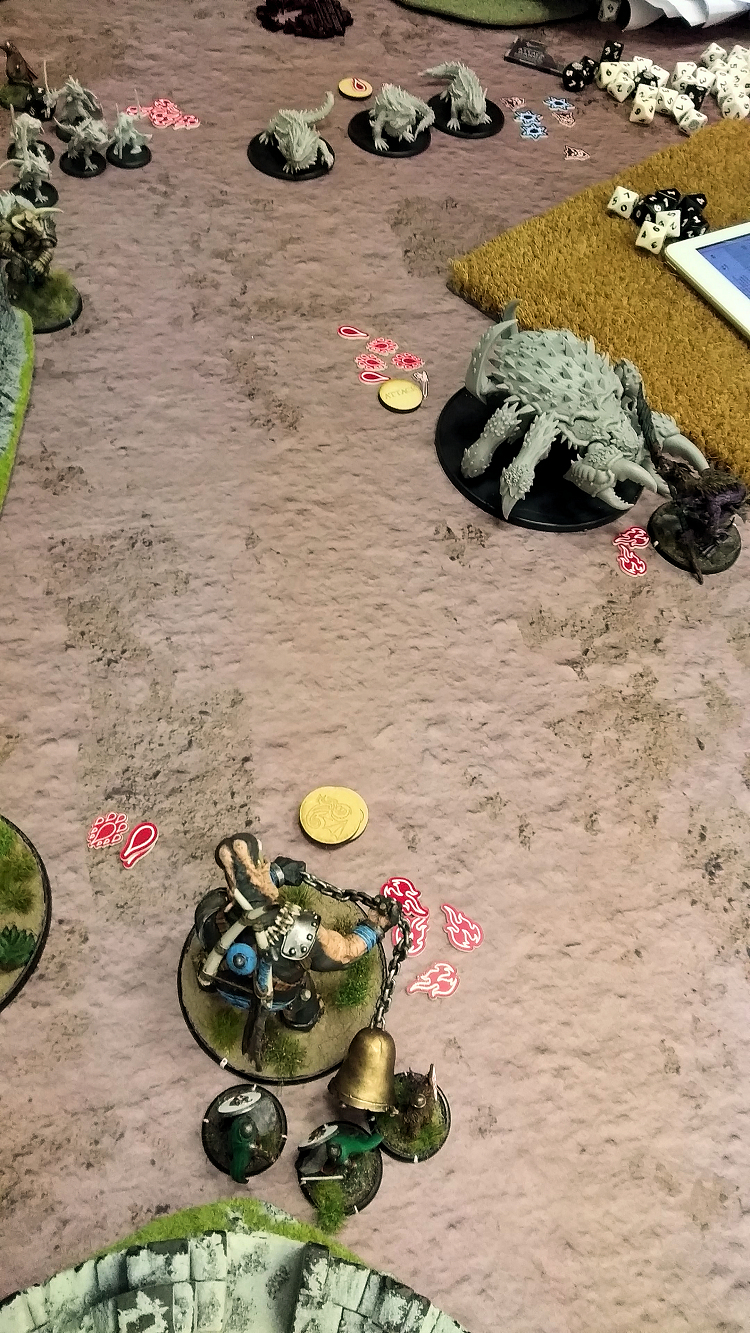 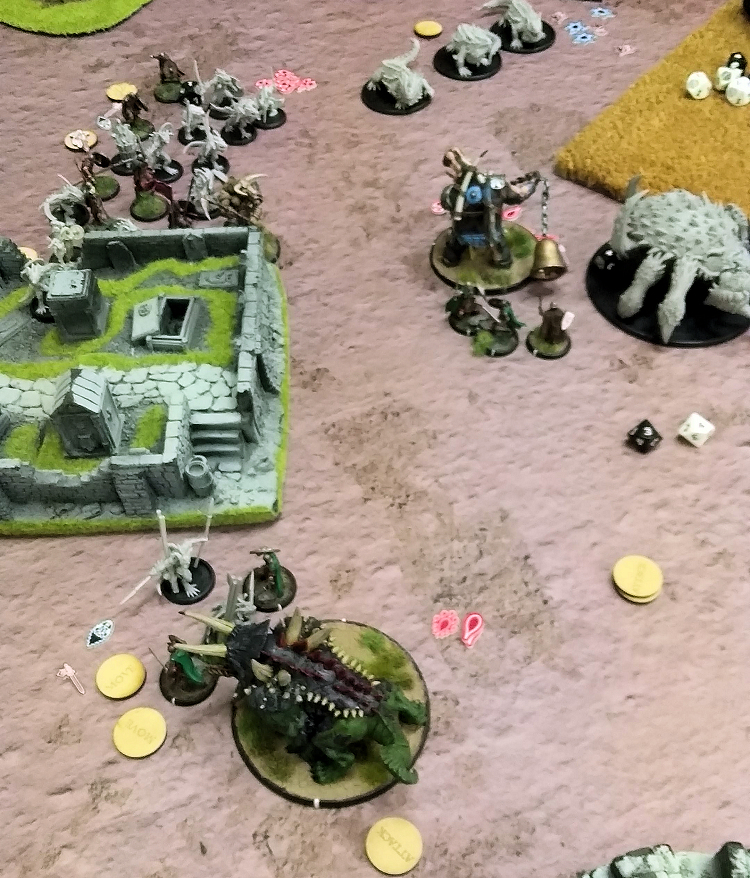 ...and get him to Charge into the Sávrar / Sávrakar, who put up a good fight; they lose the combat, but stand thanks to the Sávrarchon telling them to. 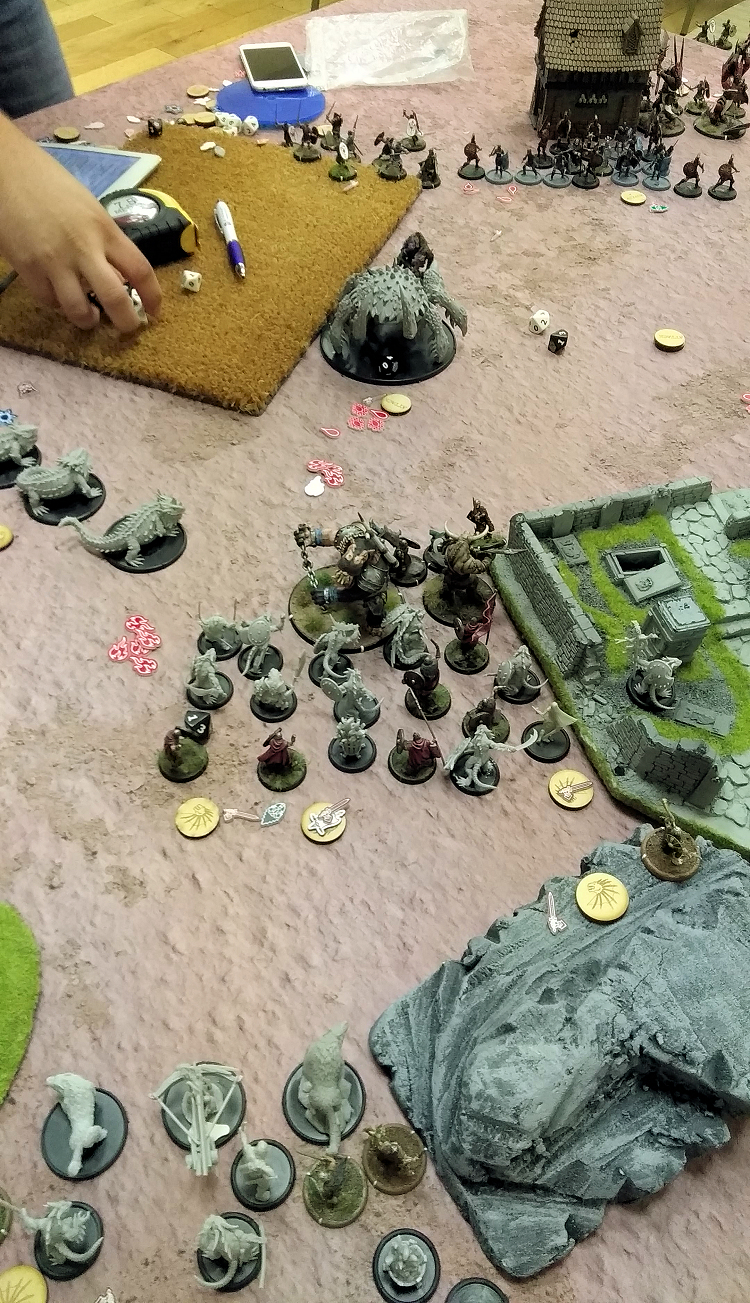 A bit of an exchange of fire ensues with little effect all around, and then the Szalamandra, having been Basked by the Sávrargós, Run into the rear of the Hippoxus and whilst they don't kill him they reduce his wounds substantially. 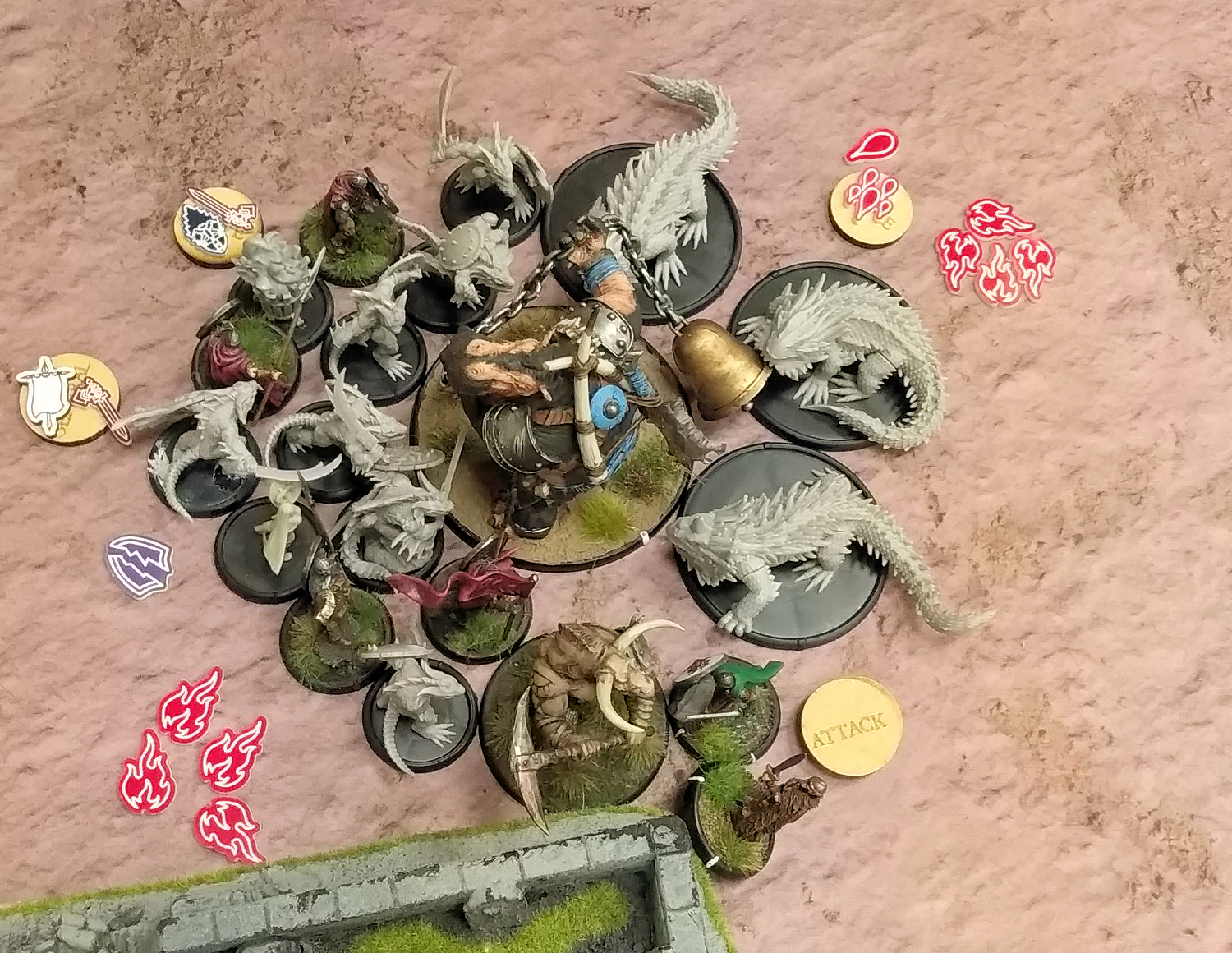 HOUR 3
After this I got fed up of taking photos so there aren't any more, and we were nearing the end of the night.

Jon got the initiative and killed the Sávrakontar facing the Tarask, whilst the Szalamandra finished off the Hippoxus after it passed its fire effect test.

Jon then popped off a lovely Hell Pit onto the Krokod's head, which caused a couple of wounds but nothing to trouble him.

At that point we called it - had things gone on, the Option / Bestiarii with the Hippoxus would have died, the Dromedus Secundus would have died, and my Sávrakontar would have died; so it was still close really, around 800 gold for me and around 600 for Jon, but a cracking game and as we were both still learning our respective hosts things were a little slow (and of course I was recording this).

All in all a good work out for both armies!

Was a really fun game, look forward to receiving the Battle Host so more of those models will no longer need to be proxies

Glad you liked it Andy!

Got some more pictures of the game too 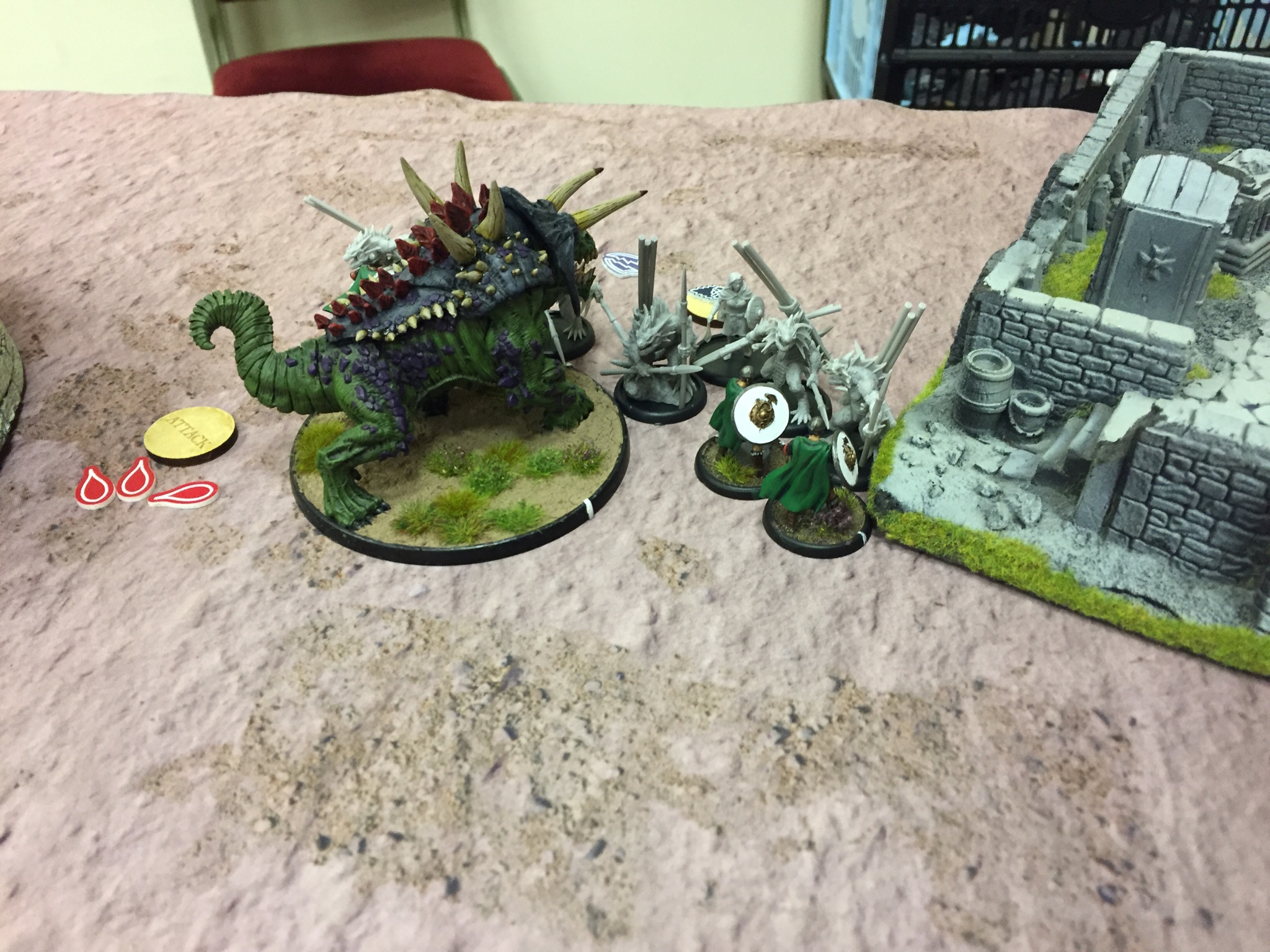 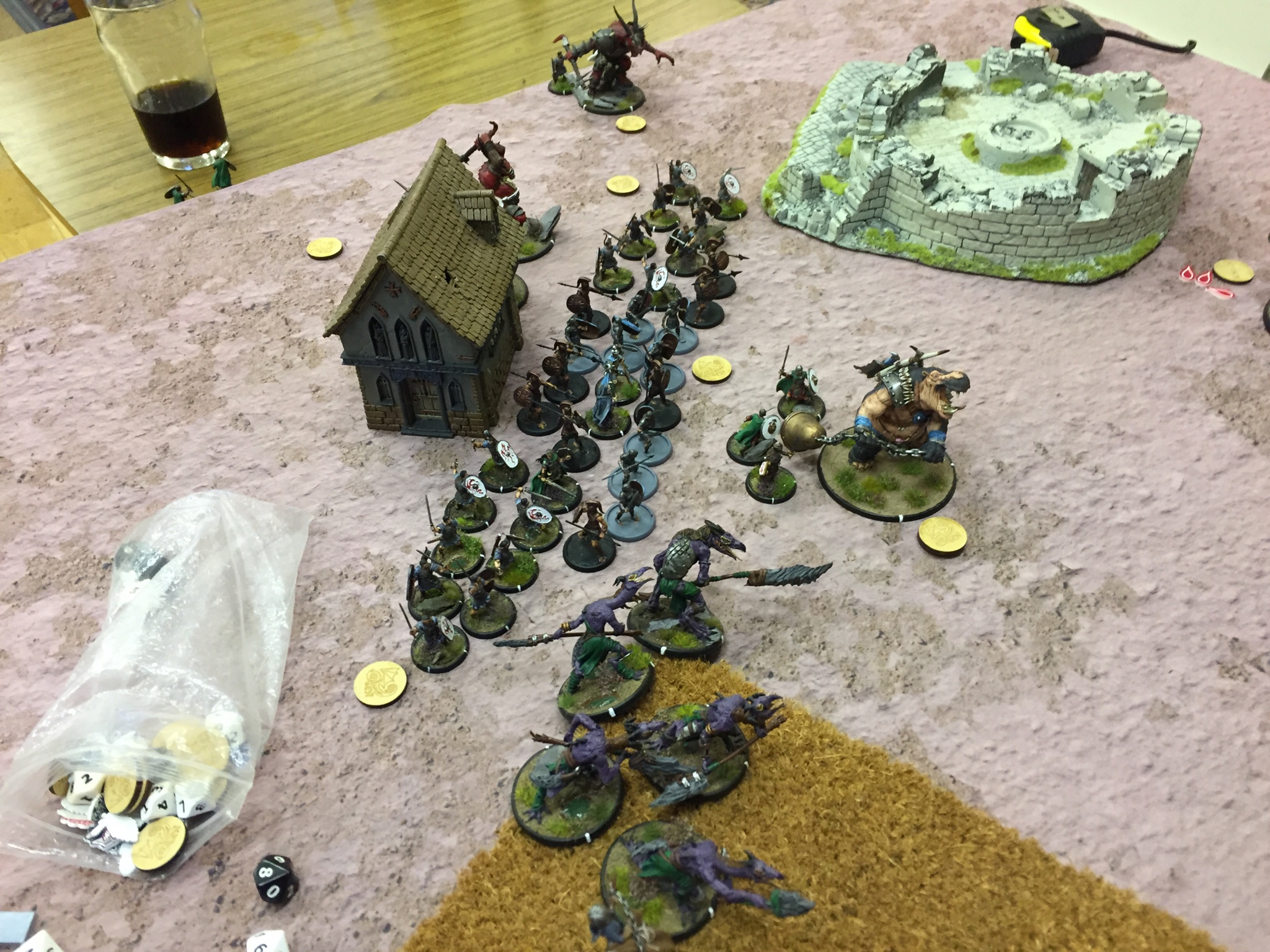 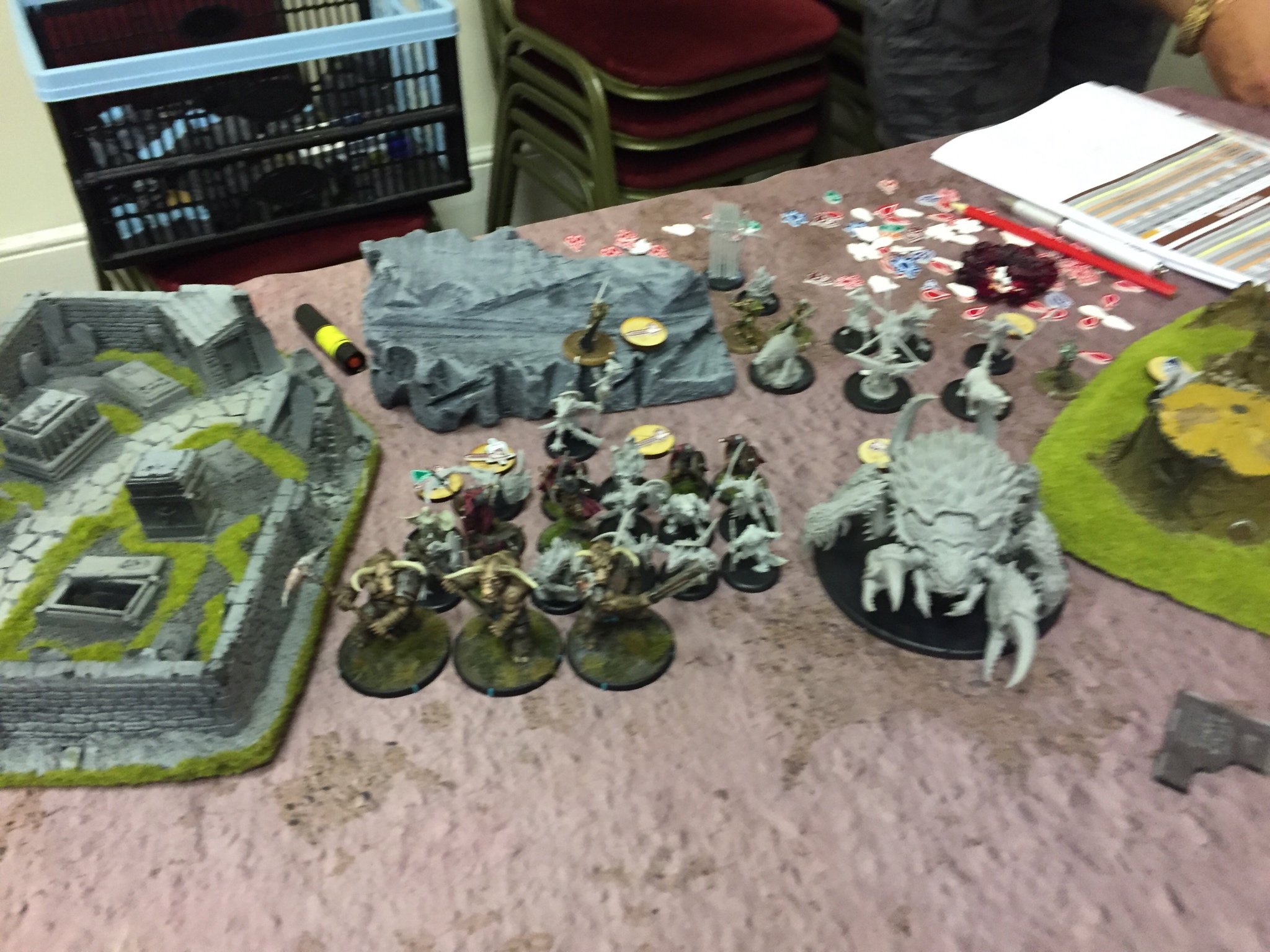 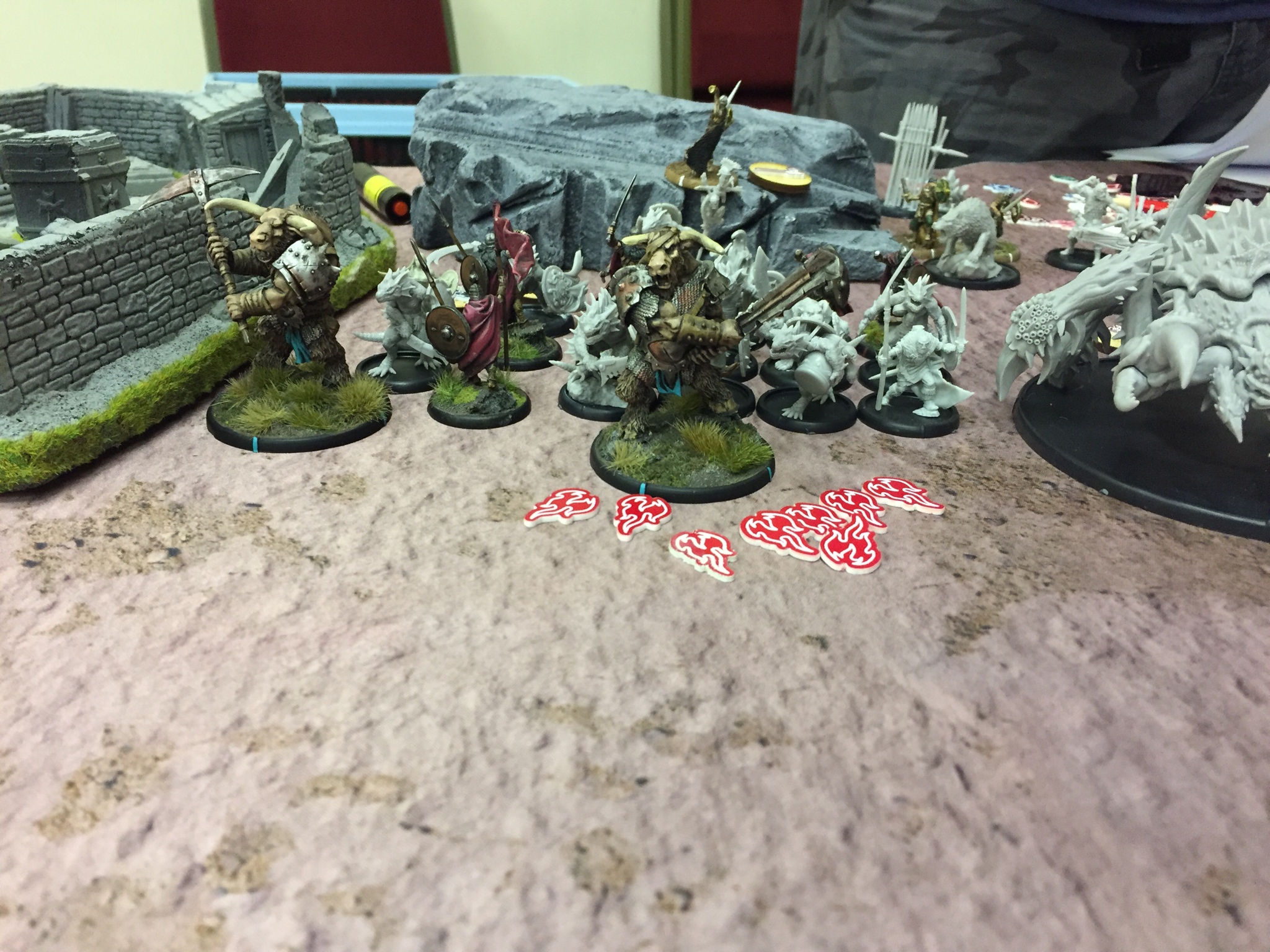 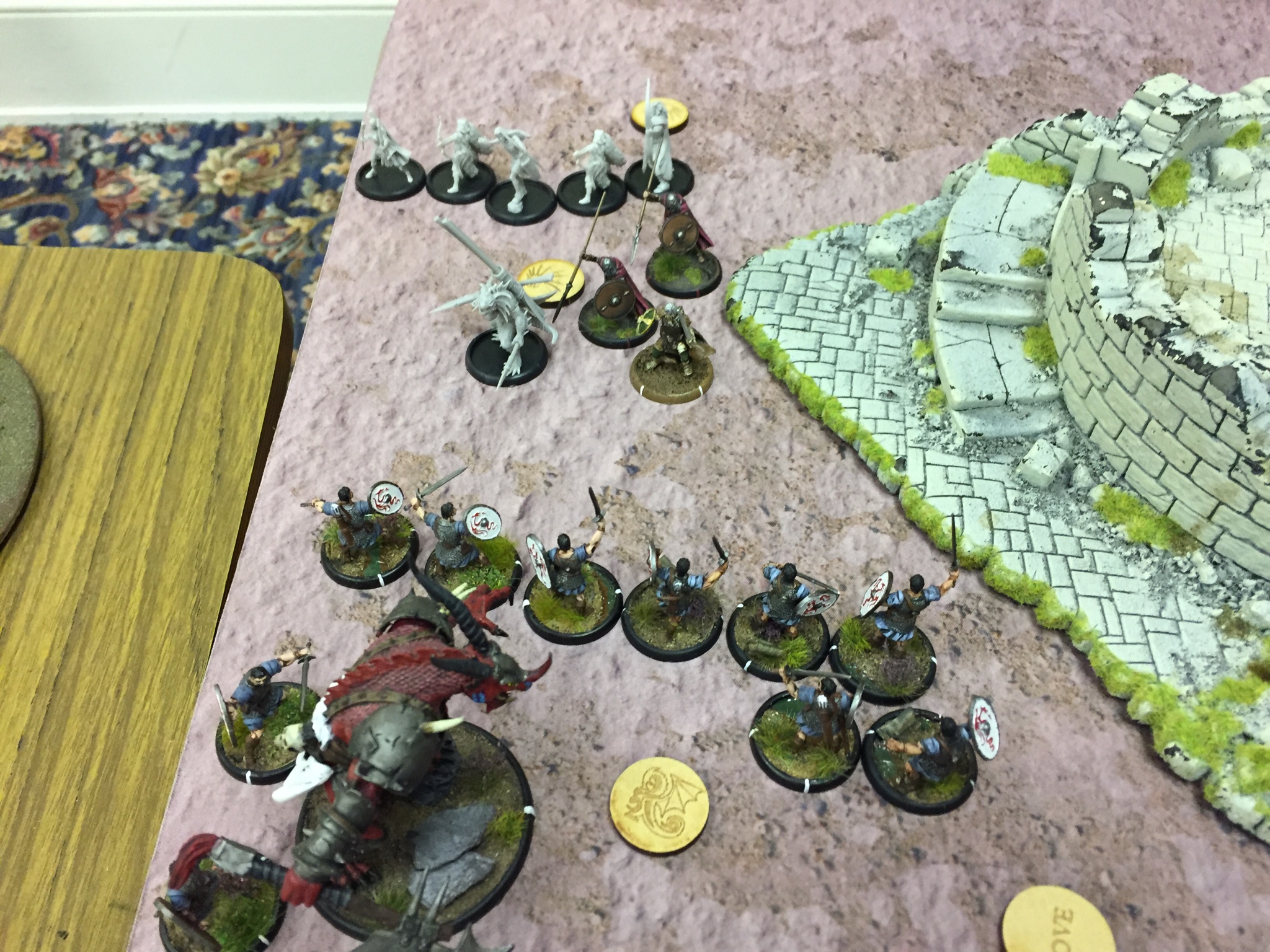 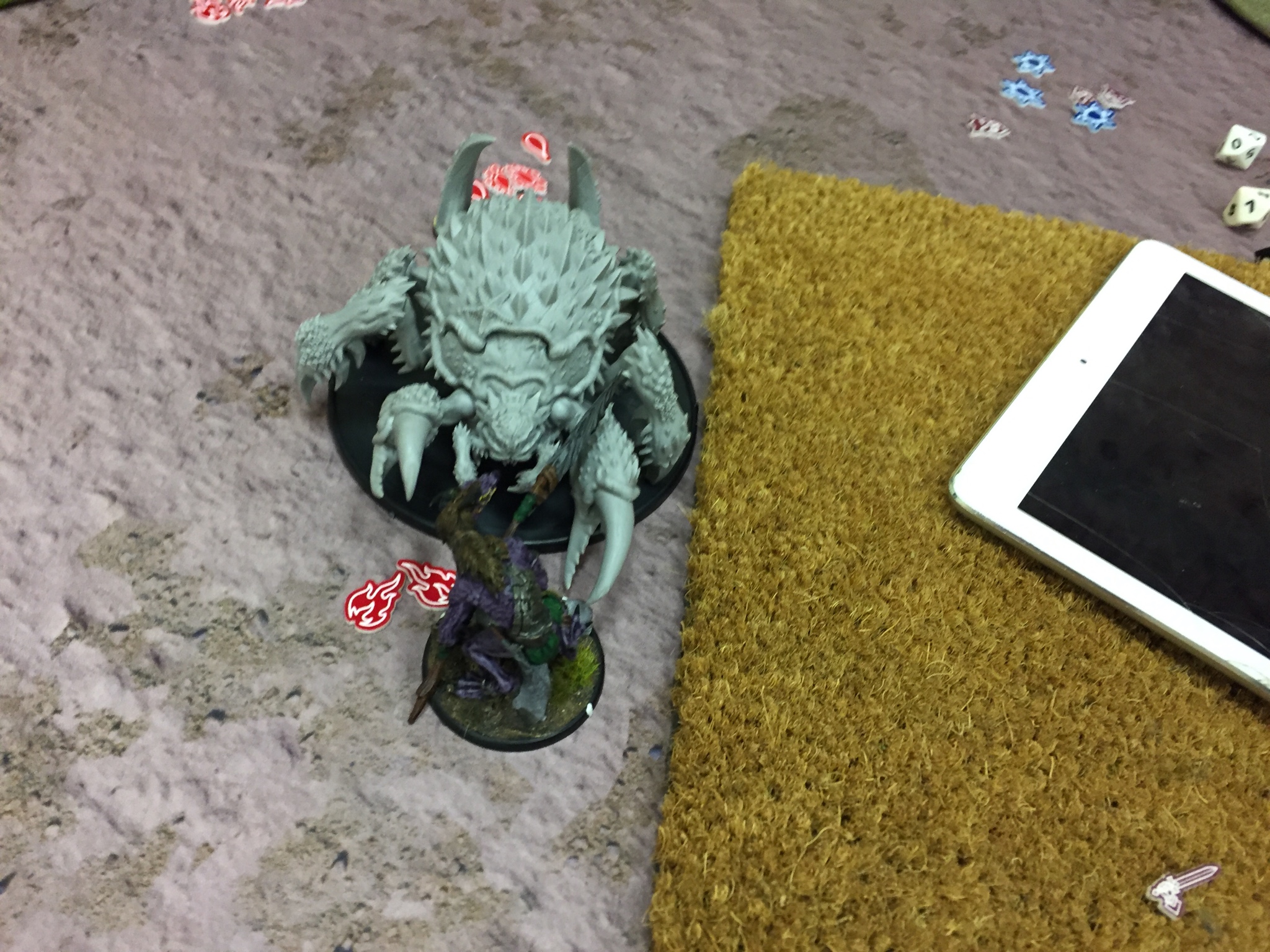 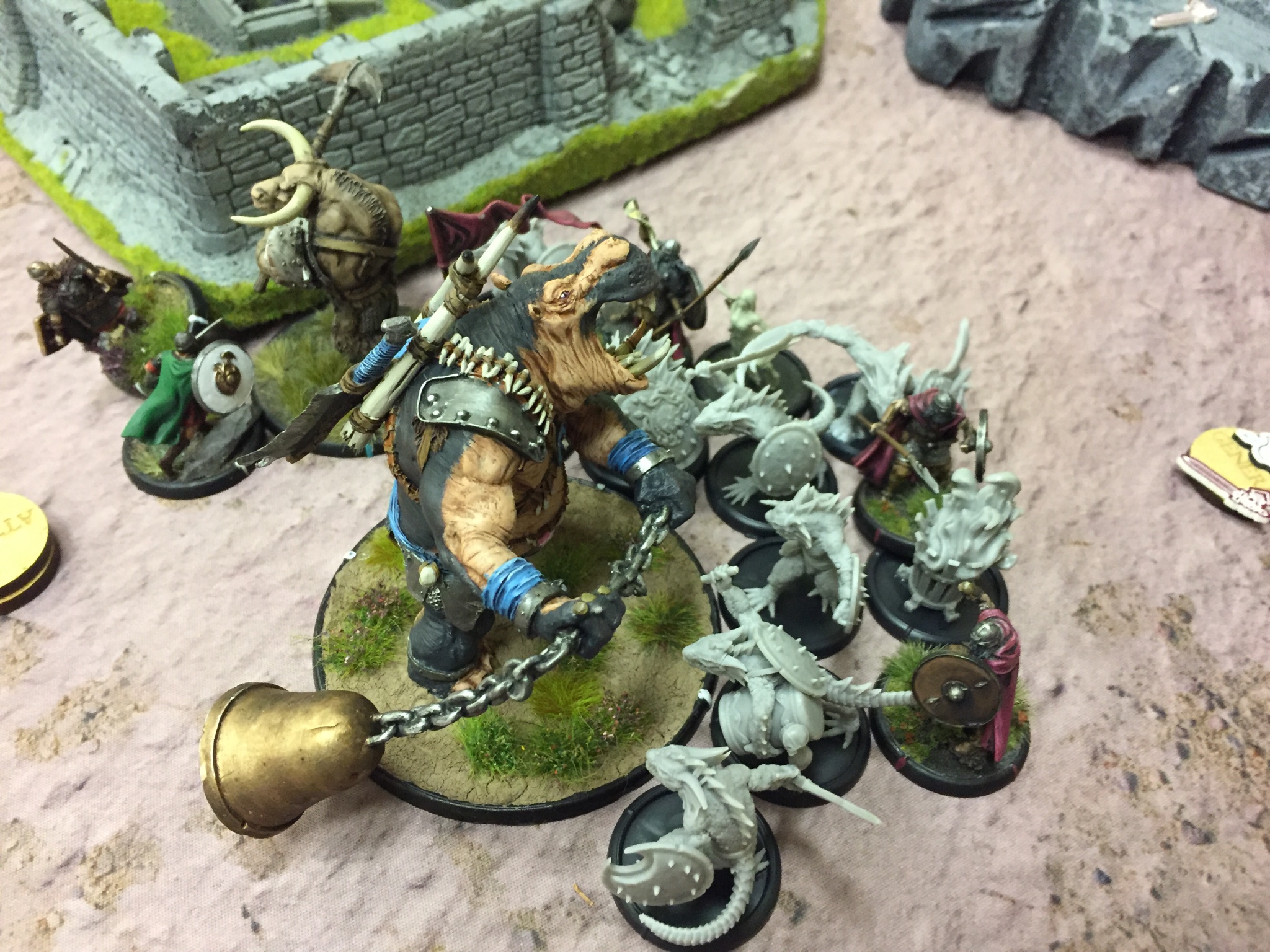 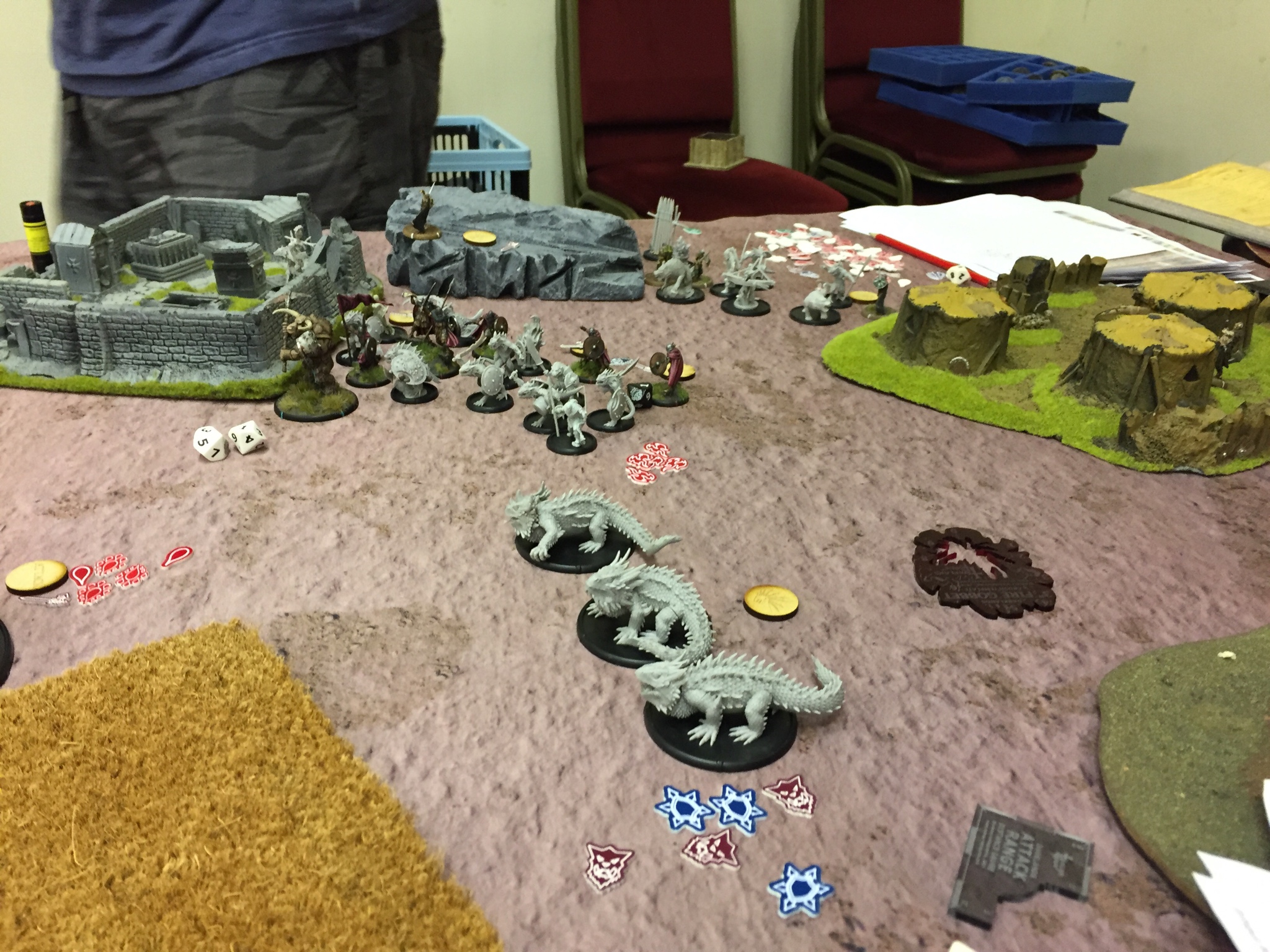 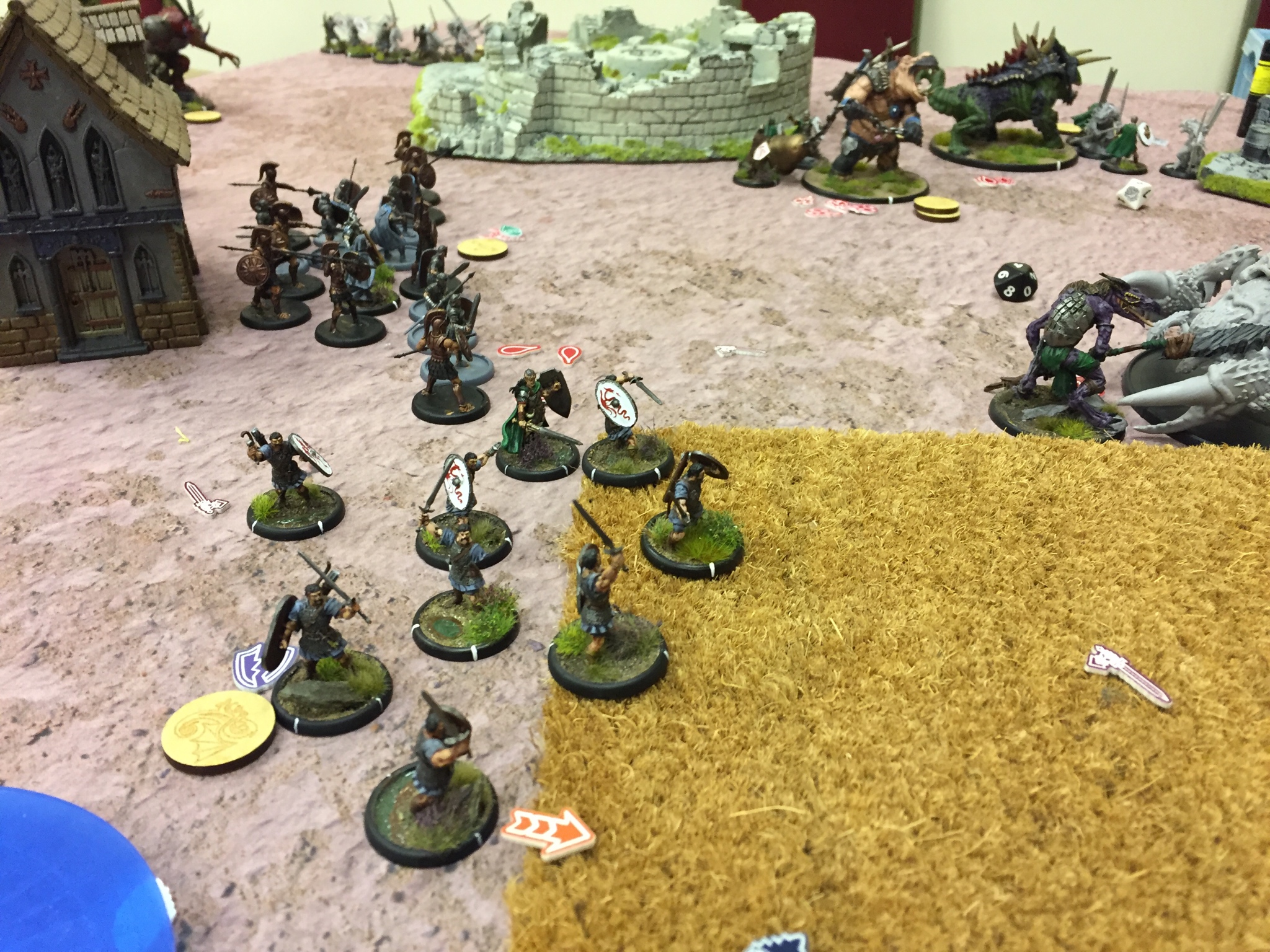 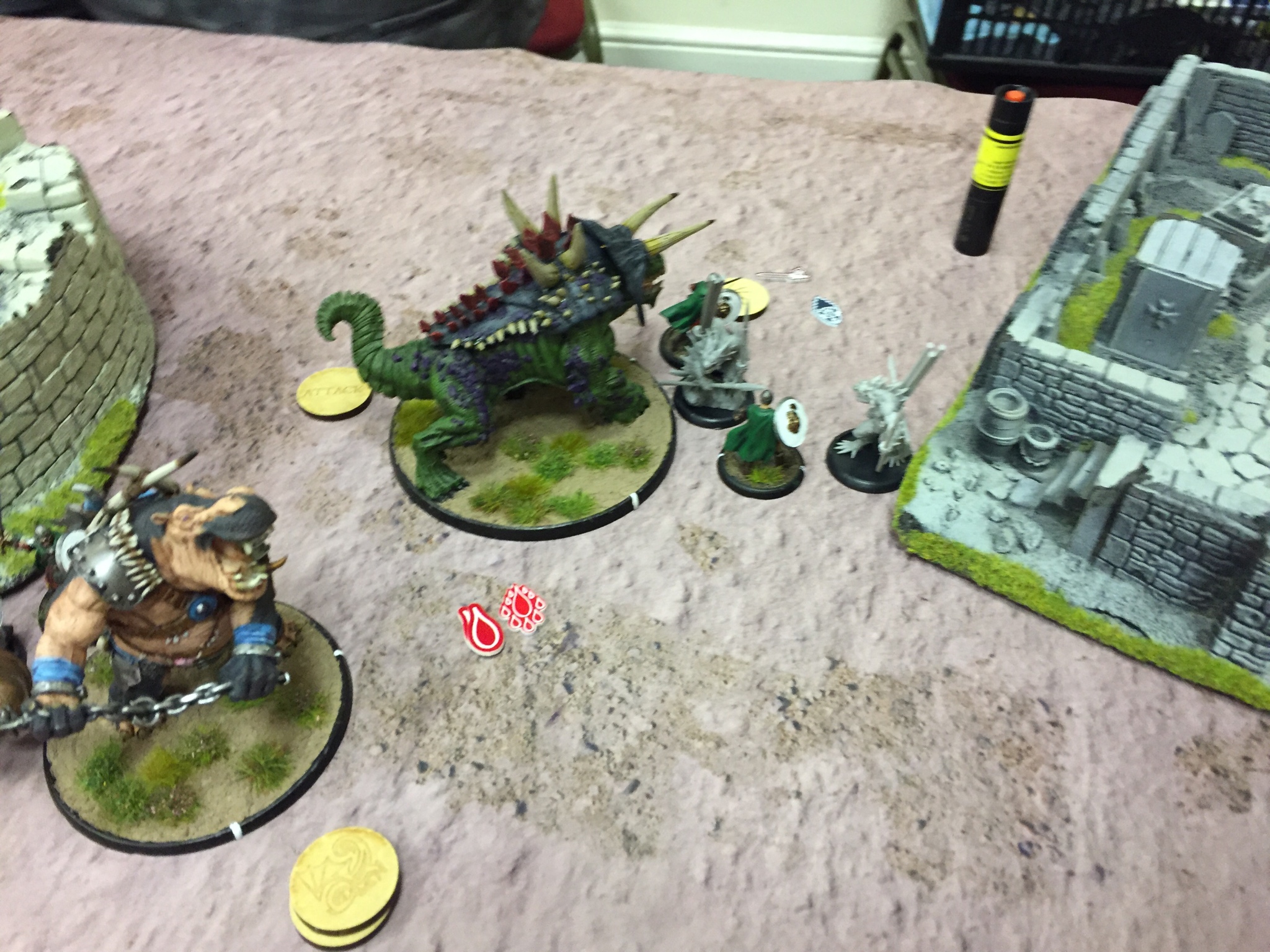 Yes please. These are a great way to learn about the game.
Top

indeed, very interesting and fun, learned things about units and armies I don't use or fight against, we need more!
Top
Post Reply
13 posts • Page 1 of 1